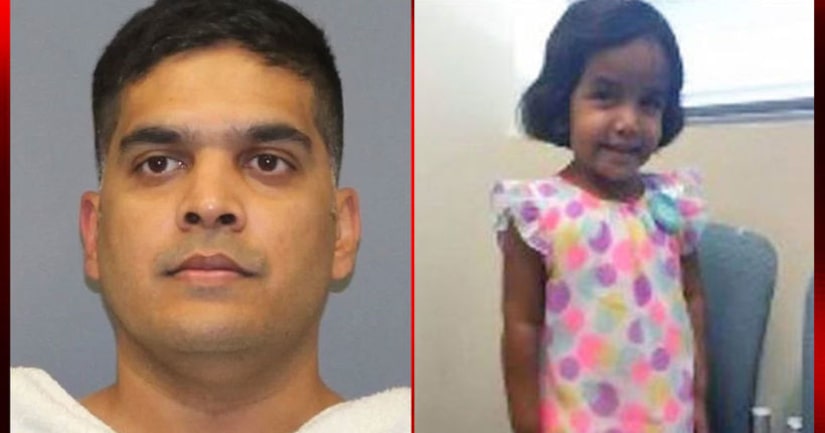 RICHARDSON, Texas -- (KDAF) -- The arrest affidavit for Sherin Mathews' father, arrested for a second time in the disappearance and death of the 3-year-old Richardson girl, shows Wesley Mathews changing his story.

Richardson police say Mathews voluntarily showed up to the Richardson police station Monday with his attorney and told cops a different story about what happened the night Sherin disappeared. Wesley Mathews now says the little girl choked to death while drinking her milk in the garage.

The Dallas County Medical Examiner confirmed Monday the body of a young child found during a search for the girl on Sunday is that of Sherin, who was reported missing on October 7. The official cause of death has yet to be determined.

According to the arrest affidavit, released one day after his second arrest in the case, Wesley Mon Mathews told police Sherin choked on her milk while in the garage of the family's home. Mathews told police he had been trying to get his youngest daughter to drink her milk in the family's garage, but she would not listen to him at first. He said he helped Sherin once she finally began to drink her milk, but the three-year-old began to choke, coughing and breathing slowly. Mathews said he believed Sherin had died when he no longer felt her pulse. Mathews admitted to police he removed Sherin's body from the family's home.

Wesley Mathews initially told police he made Sherin stand next to a tree at 3 a.m. as punishment for not drinking her milk; Mathews said he went back 15 minutes later, and the little girl was gone. Police say Mathews didn't contact police for five hours after he realized the child was missing.

Mathews was arrested Monday night and charged with felony Injury to a Child. His bond was set at $1 million.