It's a bedrock fact of the 21st century. It's that ever-present steady drum beat that you really can't ignore. Making sure you're protecting yourself and your data online is the most important action any web user can take.

However, it's easy to get overwhelmed tackling the daunting security task of defending yourself against the most tech-savvy hackers, snoops, and malicious forces stalking cyberspace.

Even if you avoid the clutches of crooks, this year's Congressional decision to roll back FCC rules that kept internet service providers (ISPs) from selling your customer data to third parties without your permission still puts you at risk. In all those scenarios, your vital details, preferences, and surfing habits are in the public domain with enough visibility to make anyone uncomfortable.

If a massive company like credit giant Equifax is vulnerable (to the tune of 143 million hacked accounts back in May), then what chance do you stand of staying safe?

More than you might think, actually. It starts with the services of a solid Virtual Private Network, better known as a VPN. Enlisting the protection of a reputable VPN provider like Windscribe can be the difference between safe travels across the web and finding your bank account info up for sale to the highest bidder on the dark web.

So what exactly does a VPN do, anyway? In simple terms, a VPN provides a fully-enclosed conduit to the internet, impervious to trackers. A VPN can make your IP address look like it's coming from a different computer in a different country while also shielding your online activity from anyone trying to follow your movements.

In fact, the best providers (Windscribe included) don't even keep any user logs themselves. That ensures your VPN service could never sell or even reveal where you've been or what you've been doing online if they wanted to.

If you're at all on the fence about the benefits of using a VPN, here are a few of the concerns you'll never have to worry about again once you're safely ensconced in your VPN cloak. 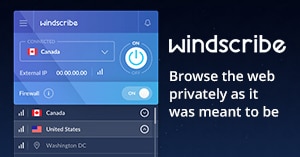 Sure, public WiFi is great if you don't have a cellular plan or a strong signal. However, those public WiFi networks are a bit like a public bathtub — they're only as clean as the dirtiest person inside. Once you're connected to an unsecured, unencrypted public network, thieves can infiltrate your system and extract data without you even realizing it's happening.

Under your VPN shield, however, you're safe. Even if you're using public wireless networks, your drum-tight VPN connection makes sure all your browsing, emails, and saved documents stay firmly protected behind your private firewall.

Yes, downloading copyright-protected movies or television shows is illegal, but those aren't the only files or useful content available in legal peer-to-peer sharing networks. With your VPN on the case, you'll stay private and protected while on vulnerable P2P networks. No matter what you're sharing, you can download and distribute on P2P sites — and sleep soundly knowing your identity and actions are shrouded from view.

Maybe you work for one of those companies or universities that restricts its employees or students from accessing social media sites like Facebook, shopping portals, or any other questionable web content on their networks. While that is tremendously unfortunate, you can just fire up your VPN and go anywhere you want under its protective banner. The admins employed by your overlords won't be able to decipher who you are or what you're doing. Take that, oppressive regimes!

While those are some of the pitfalls a VPN can help you avoid, your service will also offer some web browsing bonuses as well, such as being able to watch whatever you want, anywhere you want to go.

Ever tried to use your American Netflix account while traveling overseas? It likely didn't go so well because Netflix, like Hulu, Pandora, and a host of other content services, often geo-lock products to specific regions of the world. So if you want to watch a U.S.-based account from Europe or Asia, you're out of luck. That is, unless you're logging in under the protection of a VPN.

Windscribe and other top VPN providers allow you to adopt an IP from anywhere in their network, making you appear to be enjoying content from any country you choose. From now on, you'll tell Netflix what to watch, not the other way around.

Likewise, VPNs help you fight back against government censorship. We made jokes before about companies or schools that put restrictions on what users can access. But that's no longer a laughing matter when it's world governments restricting what their entire populace can consume online.

From Egypt and Afghanistan to Cuba and Syria to China and Belarus, some nations have exercised widespread censorship, and clamped down on some or even all web access. No matter whether you're in one of those countries or one with its own shaky history of web freedom, a VPN has your back. Your VPN service can make you appear as a user in another country and surf without the fear of watchful eyes following you across the web.

Most importantly, VPNs help affirm one of the most basic tenets of free nations worldwide: that your privacy is a right that shouldn't be restricted by anyone. Whether you want to stand up for a basic human principle or just make sure your information stays yours and yours alone, Windscribe and other VPN services are a battle-tested means of protecting you and your systems any time, any place, anywhere.

As an exclusive offer to Crime Watch Daily readers, you can pick up a five-year plan with Windscribe at just $34.99. You can also get a lifetime of Windscribe VPN for only $69.99. Either way, it's more than a 90 percent discount off Windscribe's regular prices with this limited time deal.