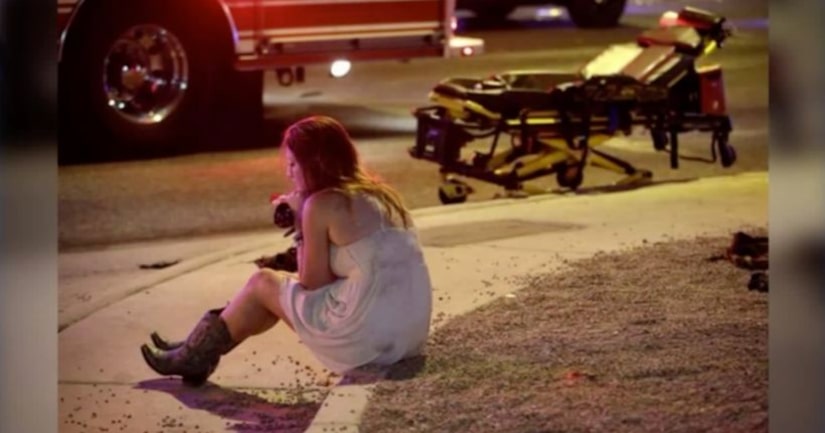 SAN DIEGO -- (KSWB) -- You may have seen the emotional photo of a woman sitting on a curb in Las Vegas moments after the deadly massacre in which 58 people lost their lives.

Concertgoer Sheri Sletten recounted the aftermath of the horrific attack and shared the story behind the photo:

"It was a very emotional time for me and there are just no words to accurately describe it. We had started running when the shots rang out and dove behind what I think was a bar. When he stopped to reload we jumped up and ran again. Your whole body tenses up preparing for a bullet to hit at any moment as you see others drop right next you. Once we cleared the venue I turned to see a woman next me go down, a bullet going straight through her calf. I helped carry her behind us into the medical tent back inside which is where I lost Celeste. Off duty police, military men and women, anybody with medical training, we all stood side by side moving from one person to the next. The blood soaked American flag bandana seen in my hands I had pulled off a man's head and used to try and plug a hole in his back with pressure as he died with his face in one of my hands. I put it on my arm and kept going until there were no more victims moving. SWAT came and cleared the few of us left to the parking lot across the street. One man still there didn't know where to go as he had just held his friend as he died. Another man was waiting to see his wife that was still back inside. We knew no one in there was moving but still he waited. Bodies lay covered with shirts or jackets up and down the street. I took my blood soaked gloves off and that is when my adrenaline crashed. I sat on that corner shaking and lost realizing I had no phone and no one knew where I was. I was finally able to walk alone down empty eerie side streets and find my way back to our room where a few minutes later Jeff Sletten and Celeste found me."