What happened to the gorgeous realtor in the Houston suburb of Baytown? Did someone kidnap Crystal at an open house? Was she trying to flee from a natural disaster?

Crystal's smile captivated everyone. And no one adores her more than her best friend Bronze Beckley. Crystal gave her heart to the man who would become her husband, Steven McDowell. Bronze says at first it was a match made in Heaven, but quickly turned into Hell.

"They got married in April and by December they were separated," Bronze tells Crime Watch Daily. "But they reconciled really fast because the baby was born about a year later."

First a boy, then a girl.

Bronze says the initial growing pains of a young marriage melted away.

"I mean, they had a great life," said Bronze. "They took family vacations together, always on Facebook loving each other, posting how much they loved each other. They were loving and he was very kind and sweet and loving towards us, and it just looked like the perfect little family."

But a month later that ring would be off her finger. Crystal and Steven divorced.

Crystal's new townhouse was undergoing a remodel, so she remained in the family home with her ex. Bronze says Crystal told her it was becoming difficult.

"She was a little worried he had gotten a little possessive maybe," said Bronze. "Because he probably thought 'We are kind of co-existing, maybe there is hope for reconciliation,' and so when the new boyfriend came into the picture, that hope is gone."

The new boyfriend is a well-known jeweler in town, Paul Hargrave.

"We met in my store. She came in to have a ring remade that was her grandmother's ring," Paul tells Crime Watch Daily. "She was a beautiful person inside and out. She's unlike anyone I've ever met."

Paul says their relationship heated up quicker than summer in Texas. They were so close that Crystal and Paul exchanged adorable love notes on text message.

"We were talking about possibly moving in. She didn't want to be by herself," said Paul.

Paul says Crystal didn't want to give her ex-husband too much information because Steven may not be too happy that they were dating.

"She didn't want him to know much at all, I guess, due to the fact of his reaction and what he would say or do," said Paul.

He would probably learn about Paul soon enough. Steven and Crystal were set to go on a cruise with the kids and her uncle. But Paul says at the last minute Crystal disinvited Steven and asked Paul to go on the cruise.

"I don't think they were getting along well at that time," said Paul. "And I think she was ready to get out of the house."

Then an unwanted guest crashed into their house: Hurricane Harvey.

"She woke up fairly early that morning. She was going to go pick up her kids," said Paul.

And then she had scheduled some sales appointments later that day. Paul Hargrave's surveillance cameras captured images of Crystal leaving his house in the morning, getting into her black Mercedes.

"She left here around 7 in the morning, she probably arrived at Steven's house 20, 30 minutes later," said Paul.

At 7:27 crystal texts Paul: "Have an amazing day. And you are so sweet." He texts back "I love you and I'll always support you."

"I begin to get worried after she didn't start replying back to my text messages," said Paul. "Crystal was known to reply back very quickly."

Paul frantically texts that evening: "I'm so worried about you. I hope you're okay."

He never saw her again.

When Crystal's best friend Bronze Beckley learned she was missing, she went into full panic mode.

"I told my husband, I said 'I feel something's not right," Bronze tells Crime Watch Daily.

At first Bronze wondered Crystal could have been kidnapped while showing a house.

"She is a real estate agent, and so that thought crossed your mind. But she didn't show up for her appointments that day and so that was off the table," said Bronze.

Bronze, who lives several hours away in Mississippi, tried to drive to Baytown to help in the search. But Harvey just wouldn't let her. She says she didn't think Crystal had fallen victim to Hurricane Harvey.

And neither did Chambers County Sheriff Brian Hawthorne.

"We pretty well knew it had nothing to do with the hurricane because the missing-person complaint had come in prior to the storm," said Sheriff Hawthorne.

"He was cooperative and fairly forthcoming, but we had problems getting some evidentiary items from him such as video he claimed he had," said Sheriff Hawthorne. "So obviously that became a red flag to us, why somebody wouldn't be turning stuff over to the organization that was tasked in trying to find and locate her."

"I immediately went to the police department and gave them a statement, DNA, cellphone records, camera footage, I wanted to try to get them as much information as possible so that either they could A, rule me out or B, focus on someone else that may have had something to do with this," Paul tells Crime Watch Daily.

He took a polygraph test.

"They didn't tell me the results but there was a lot of yelling and screaming," said Paul. "It wasn't a good experience for me, so I don't know if I passed or failed. They didn't really state."

Then the sheriff talked to Crystal's ex-husband Steven.

"He pretty well just told us that he hadn't seen her, that she never showed up at his house," said Sheriff Hawthorne.

Paul had said Crystal told him she was going to Steven's house to pick up the kids. Detectives now put Steven on the polygraph machine.

"He did fail the polygraph," said Sheriff Hawthorne. "He wasn't forthcoming on all those questions that we had in the initial interviews with him."

But a failed polygraph doesn't prove guilt. And it doesn't reveal what happened to Crystal.

Investigators are about to make a pair of shocking discoveries.

Inside the car the sheriff finds something very suspicious.

"It obviously told us that she or someone had placed the car there and the way the car was parked it appeared to us that it was more staged," said Sheriff Hawthorne. "We didn't think for a moment that Crystal had parked it. This was a 2013 Mercedes -- you would not normally see that in a Motel 6 parking lot with the keys left in it and the doors unlocked."

"I got a call from the Texas Ranger that Saturday afternoon saying that they had found her," said Sheriff Hawthorne.

A horrifying discovery: Crystal's decomposing body dumped in a wooded area, an area that was forecast to be covered by millions of gallons of water from the hurricane.

"It was by strangulation," said Hawthorne.

The sheriff says Steven McDowell tearfully confessed, reportedly telling them he strangled Crystal in the living room with the children in the room next door.

Steven McDowell was charged with first-degree felony murder. He's held on $500,000 bail. He hasn't yet entered a plea, and the prosecutor is expected to deliver the case to the grand jury. 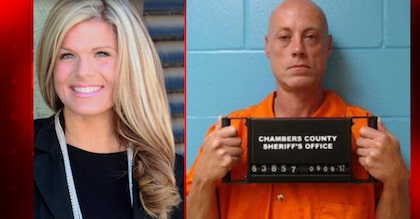