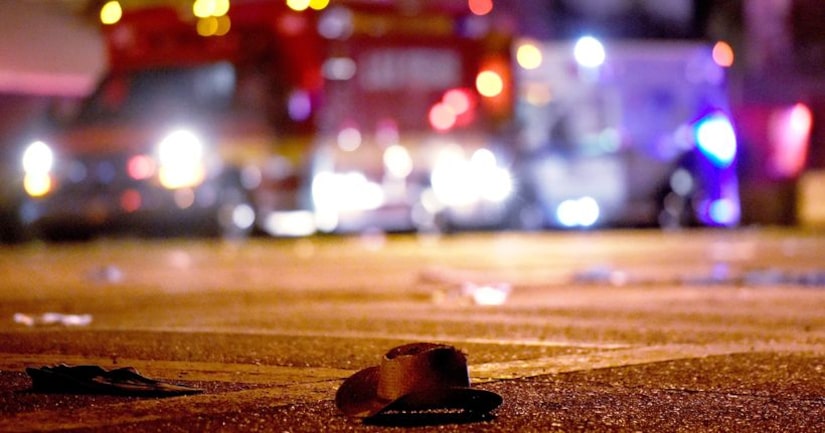 LAS VEGAS -- (KTLA) -- Brendon O'Neal, a photographer who was on stage when a gunman sprayed bullets on a crowd attending a concert in Las Vegas Sunday night, recounted his harrowing escape and described attempts to help a stranger who had been shot in the head.

“These girls were like screaming and crying and they were just like covered in blood. Just. Oh man. Super heavy,” he recounted. “And then again we heard these rounds go off. It felt like minutes that these heavy machine guns were just going on and just wouldn't stop.”

“We stopped and checked it out … she wasn't responding, she wasn't moving,” he continued. “A couple people around helped pick her up. My buddy helped get her into this police car that was like a bunker for people just hiding behind it.”

“Turns out she got shot in the head,” he added. “I remember my buddy trying to help her and got her to the police car and got her inside. She wasn't moving. She was completely unconscious.”

The shooting continued, according to O'Neal and the video he provided to CNN.

“From that point on, again, we just heard more and more machine gun. We just bolted towards the parking lot,” he said.

He and his friend were eventually provided a ride away from the scene of the shooting, he said.

O'Neal was on stage during Jason Aldean's performance at the Route 91 Harvest festival when the gunman started firing on the crowd from the 32nd floor of the Mandalay Bay Resort and Casino. More than 50 people were killed and more than 400 others were rushed to hospitals after the mass shooting and ensuing stampede, police said.