Jerry Lee Sr., 61, faces charges in the death of Lorrie Ann Smith, who was 28 when she was killed May 25, 1997. Lee wasarrested in late October after ancestry evidence allegedly tied his DNA to the crime scene, AJC.com previously reported.

Can the portrait of a killer be extracted from his own blood?

Groundbreaking new DNA technology may finally pull a suspect out of hiding. But just whose face is it police are trying to unmask, and what exactly has he done?

Lorrie Ann Smith, 28, did everything right: She worked hard, loved her friends and family, and in her small town of Cliftondale, Georgia, she even served as a youth leader at her church.

Even though Lorrie had traveled all over the world as an international business major, the prototypical good girl had chosen to come back to rural Georgia to live close to her parents.

"Where Lorrie lived had been in her family for years," said Lt. Peace.

"Her house was right next door to their house," said Dana Bogenschutz, Lorrie's sister. "Lorrie had her own house that she rented. So it's not like she had to live there. She wanted to live there."

It was a decision she made to be near the people she loved -- ironically, a decision that would tear the family apart. She was only a few hundred feet away the last time Lorrie's mom spoke to her.

"She says 'I'm very tired. They camped out the night before, she played the guitar till about 2:30 in the morning, came and was already undressed, going to get her shower and go to bed," said Lorrie's mother Jean Smith.

Sometime after that, something very bad happened in the house on the other side of the yard.

"May 25, the next morning, Lorrie's mom and dad wake up, they're getting ready to go to church," said Lt. Peace. "They give Lorrie a call to see if she was ready. There was no answer at the phone."

"I went, knocked on the door and no answer," said James Smith, Lorrie's father. "I opened the door and she was laying in a puddle of blood in the middle of the floor. Worst moment of my life."

"It was a nightmare of the worst kind," said Jean Smith. "I picked up the phone and I called 911."

Lieutenant Roger Peace of the Fulton County Police takes us back to the crime scene for an exclusive look at what investigators found.

"We believe this door is the door that the assailant entered the home," said Lt. Peace. "We found blood on these steps. Also, where the screen has been cut out, that's where blood was collected."

Lorrie's parents believe the intruder may have entered using a skeleton key, though police say it's just as likely Lorrie felt safe enough to leave the door unlocked.

"We found no signs of forced entry, and once he entered the door, we believe he would've encountered Lorrie," said Lt. Peace.

"She was fully unclothed. She was not going to open the door for anybody without clothing on," said sister Dana. "I think she was very surprised and startled."

And after that, she fought.

"We can tell that there was a very significant struggle," said Lt. Peace. "We had lamps turned over. We had sheeting pulled off the bed. Over here we have the desk that we believe Lorrie was under at one time. We believe that because there was a pool of blood, and you could see drag marks on the floor where Lorrie's body was dragged from underneath the desk."

"She sustained abrasions on her face, contusions on both her arms and legs, as well as she sustained multiple gunshot wounds," said Lt. Peace. "Lorrie fought for her life in this very room, and it was a fight that she didn't win."

But while the evidence painted a clear picture of how Lorrie died, detectives are left baffled as to why. It's not the kind of crime that happens in a town like this, and even at first glance, detectives can tell Lorrie Ann Smith did not fit anyone's normal profile for such a violent end.

"She had no enemies," said Lt. Peace. "She was not romantically involved with anyone. She was basically considered a very low-risk person to be a victim of a crime."

And yet, that's exactly how she ended up. But did she also leave detectives the key to finding her killer? In addition to finding bloody shoe prints for a men's size 10.5 Nike Cortez running shoe:

"Somewhere during the struggle she either injured him bad enough that he was bleeding heavily, or he may have shot himself," said Lt. Peace. "His blood was found in the living room by the entry/exit door to the porch, the porch screen door, and on the steps leading away from the house."

It's the kind of evidence homicide detectives count themselves lucky to find -- a crime scene signed with the suspect's own DNA.

But first, they had to find him. And no one was expecting just how twisted that hunt would become.

Shortly after Lorrie Smith was found shot to death in her home, detectives found the killer's blood all over the crime scene, a trail of DNA they hope will lead straight to his front door. But while they wait for those results to come back from the lab, police canvass the neighborhood for leads.

"We found the neighbor who lived a couple of houses down stating about 2 a.m. he thought he heard what he described as being gunshots. He said he knows he heard about three but maybe there was more," said Lt. Peace. "We also found a neighbor at the time that Lorrie was cutting grass, he observed a red car drive by Lorrie's house, as well as his house, very slowly. The vehicle turned around and made another pass, drove by again. Then about 10 minutes later he sees the car drive by again very slowly past both of the houses."

Was the person driving that car the one who fired those shots? And another question: How did the killer know to enter Lorrie's house through the back door in the first place?

"You would have to know how to enter the house, because the front door was not used. You had to enter in the back and go through the porch to enter the main room. That was all behind the house," said Lorrie's sister Dana. "So it was all hidden."

"We did focus on one neighbor very hard," said Lt. Peace. "He was a security officer. He was armed. He lived nearby and knew Lorrie's daily routine."

And there was just something about his alibi.

"He said he was running out at 11 o'clock to go get barbecue, and then fell asleep on the couch without even eating it," said Lt. Peace. "It just did not sound right. We did have a good feeling that this could be a suspect."

But detectives would need more than intuition.

"We got consent to collect his DNA and it was determined not to match the DNA of the offender left at the scene," said Lt. Peace.

In fact, when the lab work finally came back, the suspect's DNA didn't match anyone on their radar, or in any known database. It was a smoking gun being held by a ghost.

"We've eliminated over 119 people that we've collected DNA from," said Lt. Peace. "It is frustrating to have the evidence you need but you just cannot put a name to that evidence that you have. It makes you think Where is this person now? Did this person only commit one crime? Is this person dead? Or is this person in prison and his DNA has never been entered into CODIS to give us that match?"

Those questions have gone unanswered for the past 20 years. But then, just months ago, a major break in the investigation.

"As the DNA technology progressed, we resubmitted the DNA to a private company," said Lt. Peace. "This company was able to identify the DNA as not only being that of a male, but said that it was that of a black male. So that eliminated a lot of suspects

But it was still only part of the picture. What police really needed was an eyewitness who could describe the suspect's face. And they were about to find one in the killer's own blood.

"The newest technology that was developed actually coincidentally through the Department of Defense with fight on terrorism, looks at your DNA and your genetic markers and traits and it basically reverse-engineers your DNA," said Fulton County Forensics Supervisor Helen Weathers.

The program, developed by Parabon Nanolabs, is called Parabon Snapshot. After testing the blood found at Lorrie Smith's crime scene, the program produced two composites: one for how the suspect may have looked then, and how he might look today. 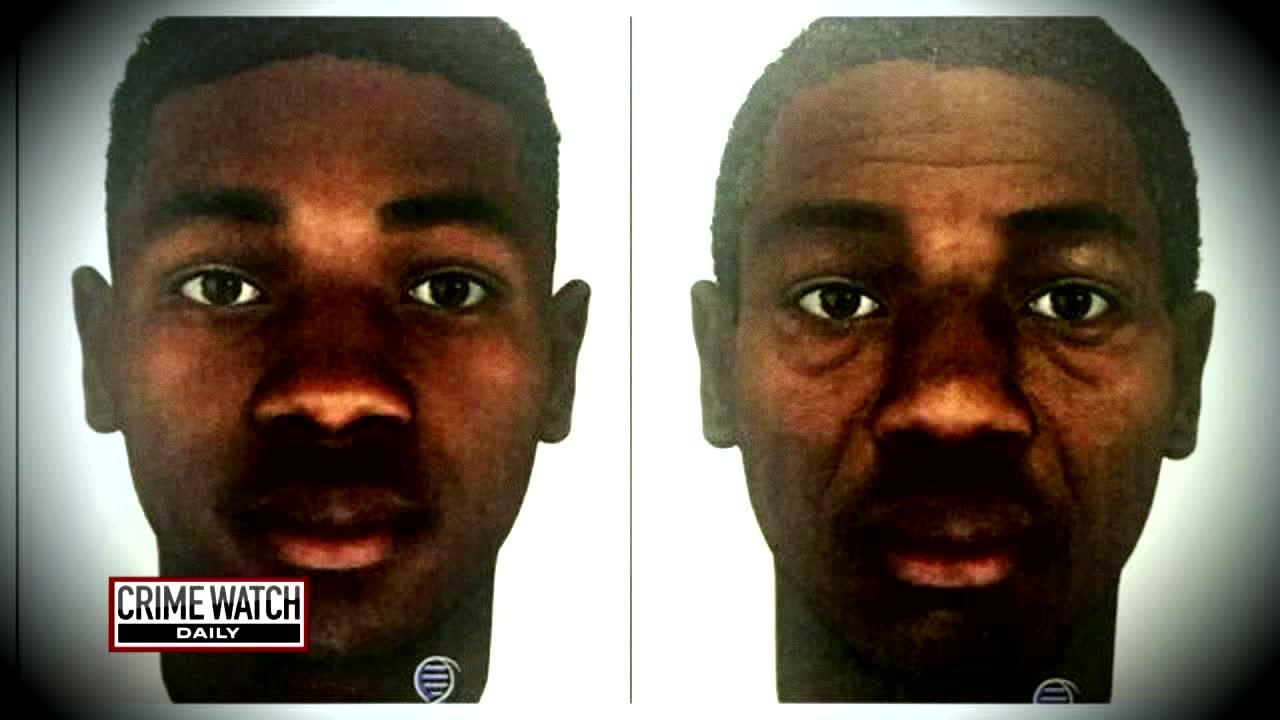 Parabon NanoLabs
After testing the blood found at Lorrie Smith's crime scene, the program produced two composites: one for how the suspect may have looked then, and how he might look today.

But for the family, it only raises more questions.

"We as a family met to look at this image," said Lorrie's sister Dana. "We all had our own scenarios and we would tell the police what our scenarios were, and when we actually saw that image, none of us recognized that person. None of us had any idea who that person was."

And no one can say if Lorrie did either, opening up the possibility of a random attack.

"I believe Lorrie was targeted," said Lt. Peace. "Was it just somebody who'd seen her cutting grass that day or was it somebody who has been looking at Lorrie a long time?"

Regardless, police believe this is the face of the man who did the targeting, and they hope the public will step up to help give him a name.

"You could be wrong, and that's OK, that's why we have our crime lab that can test the DNA," said Helen Weathers.

"We're asking people to go back in their memories," said Lt. Peace. "We got a suspicious red car that's driving up and down the street. We've got a person that wore Nike shoes. We know he's a black male. We know he's familiar with the Cliftondale area. We know that he was injured, and we know he had access to a handgun.

"It is time to give this family the peace of mind, let them have closure," said Lt. Peace.

For more information or to submit a tip, visit the Fulton County Police Dept. here. 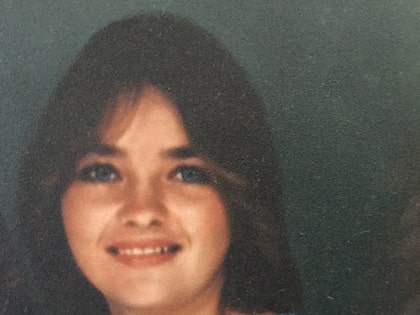 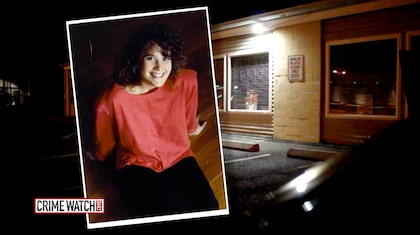 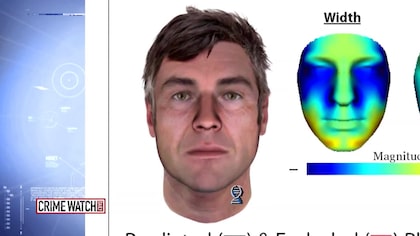 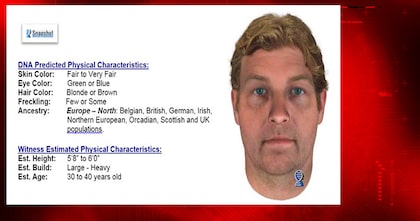 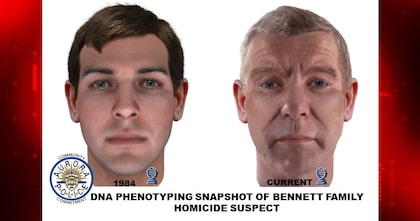