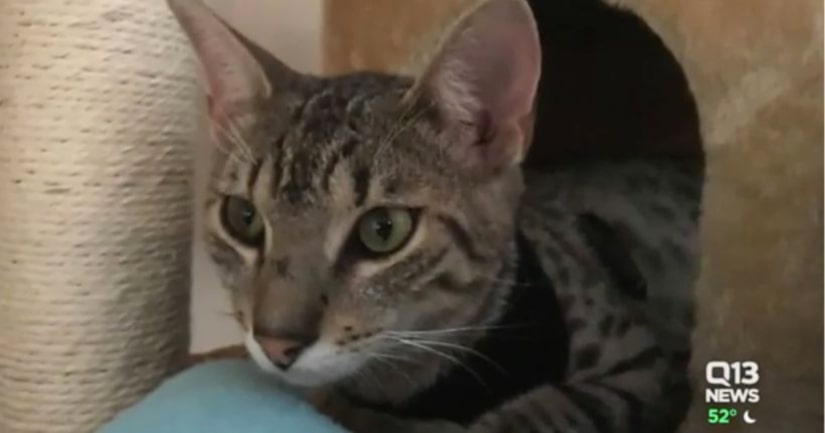 SHORELINE, Wash. -- (KCPQ) -- A horrific case of animal abuse in shoreline. A cat, temporarily staying at a rescue shelter, was stolen and beaten to death before being thrown away with the trash.

For owner Rustam Yusupov, it's hard to even talk about.

His 1-year-old Savannah cat 'Amari' — nicknamed 'Quixote' by the staff – -was staying at Whisker City Cat Rescue, separated from his twin brother until owners finished their move or found the cat a new family.

"We all feel a tremendous amount of guilt because we felt so safe here," said April Brown of Whisker City Cat Rescue.

The shelter had just found a new home for the cat this week.

Tuesday night, the cat was sleeping in one of the shelters indoor/outdoor kennels, but when volunteers arrived Wednesday morning that padlock and gates were broken and the cat was no longer inside.

Workers first reported the cat stolen but later found the feline's body among trash next to the dumpster.

The specialty cat was found with its skull crushed -- mutilated beyond recognition.

Volunteers think the decorative chair that was inside the kennel was used as a weapon.

"That cat did not have a chance. It couldn't get away."

"Homeless need homes, but not in my neighborhood," it read.

"And then it said Richmond Beach," Brown said of the note. "And it was handwritten."

But the shelter is in Shoreline--three miles from Richmond Beach.

Shelter volunteers shared they have had cats stolen from them in the past -- but suspect that the cat may have been targeted for loud meowing from his kennel.