LOS ANGELES -- (KTLA) -- Police asked the public for help Wednesday in locating a man and woman suspected of pickpocketing victims in the Hollywood area after distracting them.

Investigators say the man and woman approach their victims and tell them there is bird feces on them and offer to clean it off. As they are wiping the person's back, the man then removes the victim's wallet, the Los Angeles Police Department stated in a community alert notification.

In one incident, the man and woman took a camera from a distracted victim's backpack, the Police Department stated.

At least one of the crimes occurred near the intersection of Hollywood Boulevard and North Sycamore Avenue, a Police Department spokesperson said.

Authorities released surveillance images of the man and woman, as well as the vehicle they are believed to be traveling in. 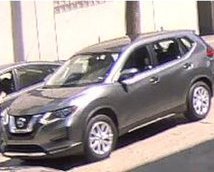 A car believed to be used in the scam is seen in an image provided by the Los Angeles Police Department.

The man was described as Hispanic, about 5 feet 6 inches tall and weighing between 170 and 180 pounds. He has black hair and brown eyes, and was wearing a blue/white checkered shirt, dark shorts and a black baseball cap.

The woman was also described as Hispanic. She stands about 5 feet 4 inches tall and weighs approximately 140 pounds. She was seen wearing a black shirt with flowers, black pants and a black hat.

Both are believed to be between 35 and 40 years old.

Police are searching for a newer model Nissan Rogue with dealership plates.