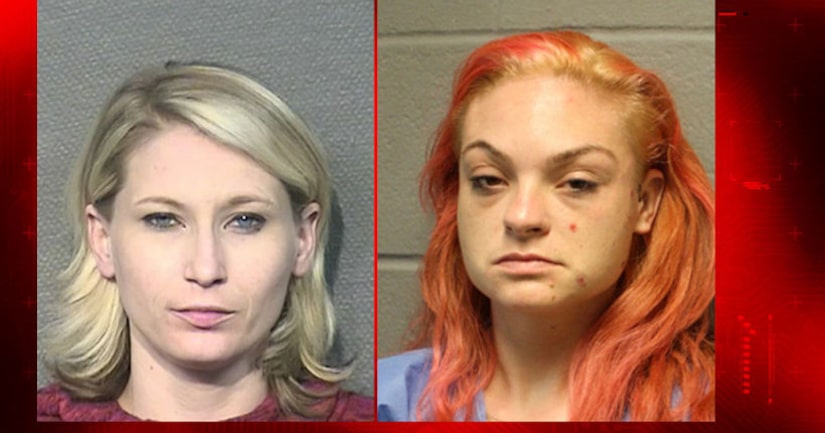 HOUSTON -- (KIAH) -- Nearly a dozen officers were forced to open fire on two women who led them on a high-speed chase which ended in the Bellaire area Monday night, according to Houston police.

Officers attempted to pull over a black Cadillac Escalade for traffic violations at the Southwest Freeway and Bissonnet.

The driver, Katrina Bendslev, 32, refused to stop, and led officers on a high-speed chase.

Officers allegedly witnessed the passenger, Raeanna McFadden, 28, throw two syringes and a small bag of methamphetamine out of the vehicle's window onto the Southwest Freeway.

Bendslev exited the South Loop into a residential neighborhood and turned off her lights. She then drove to the 4500 block of Sunburst, a dead-end street. There were large fences at the intersection near Newcastle, which prevented her from fleeing further.

Officers attempted to stop the women again, and as they were outside of their vehicles giving Bendslev and McFadden verbal commands, Bendslev struck a fire hydrant and reversed at a high rate of speed, hitting at least two marked patrol vehicles. Bendslev then accelerated toward the officers, according to HPD.

Fearing for their lives, nine HPD officers discharged their weapons and struck the vehicle several times. None of the officers suffered any injuries.

A nearby resident was shot inside her home when a bullet entered through the front window. The victim was transported to Ben Taub Hospital where she was treated and released.

Bendslev and McFadden sustained gunshot wounds, and were also transported to Ben Taub Hospital. Thier injuries are unknown.

Bendslev has been charged with aggravated assault against a public servant, and McFadden was charged with tampering with evidence.

This case is being investigated by the HPD Homicide Division Special Investigations Unit, the HPD Internal Affairs Division and the Harris County District Attorney's Office.