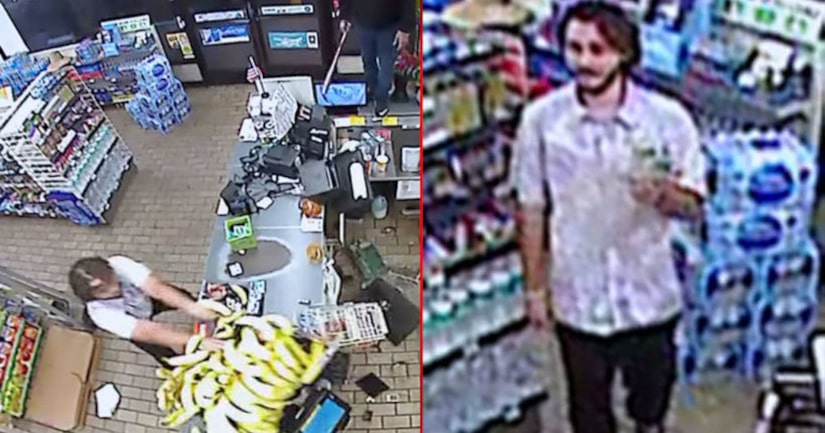 SANTA ANA, Calif. -- (KTLA) -- Police on Tuesday released surveillance video as they asked the public for help locating a man accused of assaulting a clerk and trashing a 7-Eleven in Santa Ana after being denied use of the store's phone.

The incident occurred in the 7-Eleven located at 1020 S. Bristol St., about 2:36 a.m. on Aug. 25. It began when the suspect entered the convenience store several times, asking to use the phone, according to a Santa Ana Police Department news release.

After being told to leave, the man “became destructive” and allegedly assaulted a store employee, the release stated.

Surveillance video from inside the store then showed the man shoving items off the counter near the cashier before apparently exiting the business. The footage cuts out, and the next scene shows the same individual smashing and destroying the storefront's glass windows and doors.

The vandalism caused approximately $2,000 worth of damage to the 7-Eleven, police said.

Detectives are asking for help identifying the man seen in the footage.

Anyone who knows who he is, or has information about the case, is asked to contact Investigative Specialist L. Delisle by calling (714) 245-8647 or emailing ldelisle@santa-ana.org.