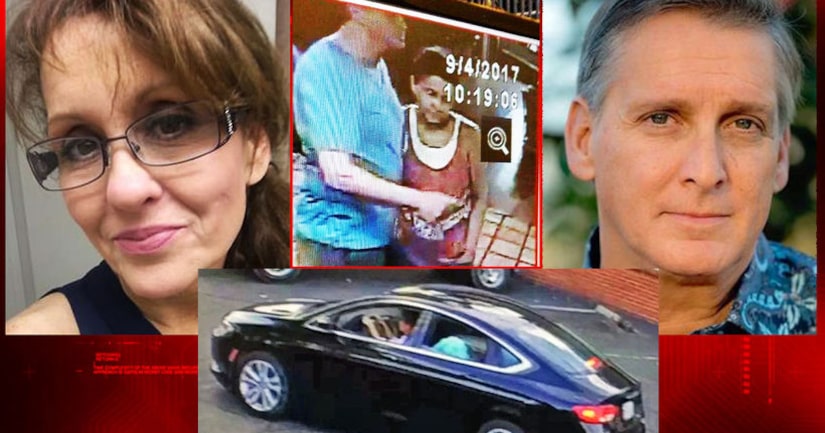 Police say Virginia Paris was found at a Las Vegas-area casino-hotel near the Arizona border.

Henderson Officer Rod Pena says security at the Railroad Pass Hotel and Casino reported that Virginia Paris approached guards late Monday and told them she had been abducted, KTXL-TV reports.

LOS ANGELES -- (KTLA) -- A Santa Barbara County woman and an ex-boyfriend who allegedly kidnapped her are believed to be traveling in the Las Vegas area, officials said Monday.

Authorities have been searching for Virginia Paris, 55, since last Friday, when she was abducted by 52-year-old Joseph Hetzel shortly after leaving work in Solvang, according to the Santa Barbara County Sheriff's Office. The two Lompoc residents were last spotted around 7:30 a.m. Monday in Valle, Arizona, checking out of a hotel where they had spent the night.

Virginia Paris had recently sought a restraining order against Joseph Hetzel, who has served jail time for charges stemming from a domestic incident, officials said. Her friends told the sheriff's department the order had been granted but not yet served.

Many of those charges appear related to another domestic incident, in which sheriff's officials said Hetzel targeted another ex-girlfriend, poisoning her dogs and vandalizing her home on several occasions, according to the Lompoc Record.

Surveillance cameras captured them Monday as they were checking out of the Grand Canyon Inn in Valle, located about 65 miles northwest of Flagstaff. Information provided by witnesses indicates Paris was being held against her will and they were headed to Las Vegas next, investigators said.

Sheriff's officials have been tracking the two with the FBI and law enforcement agencies in Nevada and Arizona.

They were also seen the previous day, Sunday, at a Starbucks in Goodyear, Arizona, around 7:15 a.m., detectives said.

Paris gave her name, Virginia, when she ordered her drink then went to the bathroom. When she came out, she told another woman in the store that she needed help.

After witnessing the interaction, Hetzel allegedly grabbed Paris and dragged out of the store. He kicked her into the car and fled at high speeds, according to sheriff's officials.

As the car drove away, Paris threw her car registration information out of the door, investigators said. It was recovered by Goodyear police officers.

Paris is described as a white woman, about 5 feet 6 inches tall and weighing around 150 pounds, with brown hair and eyes.

Hetzel is described as a white man, around 6 feet 2 inches tall, weighing approximately 195 pounds, with brown hair and hazel eyes. He is believed to have access to guns and authorities consider him armed and dangerous. He should not be approached, officials said.

Anyone with information about their whereabouts should call 911. Anonymous tips can be submitted via 805-681-4171 or www.sbsheriff.org/anonymoustips.