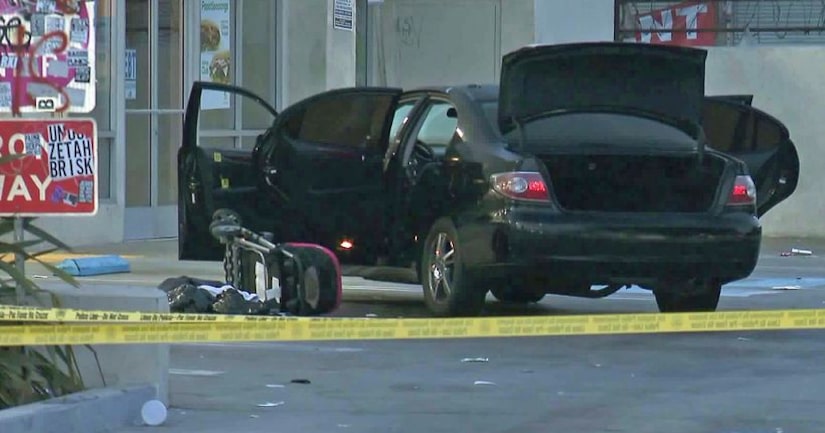 LOS ANGELES -- (KTLA) -- Police are searching for a gunman after a mother was shot and killed as she travelled in a car with her husband and two children in South Los Angeles late Sunday night.

Police were sent to a 7-Eleven near the intersection of West Manchester Boulevard and Central Avenue when a shooting was reported just before midnight, Los Angeles Police Department Sgt. Thomas Bojorquez said.

The shooting occurred as the family of four was traveling southbound in the 8300 block of Central Avenue, Detective Eric Crossen said.

Another car pulled up to the victim's vehicle and opened fire, striking the mother and father.

The father managed to drive a little further on Central Avenue and then pulled in to a 7-Eleven parking lot, where the mother died at the scene, Bojorquez said.

The father had suffered a gunshot wound to his lower body, but was listed in good condition. Bojorquez said.

Authorities have not identified the mother or the father.

The couple's two daughters, ages 3 and 5, were in their car seats at the time of the shooting.

The 5-year-old was treated at the scene for superficial wounds, Bojorquez said. Both girls are with family members Monday morning.

There was no word on how many people were inside the vehicle that opened fire on the family.

Investigators have not described the shooter's vehicle or given a description of the gunman.

Authorities are searching nearby businesses for surveillance cameras in hopes of gathering more information.