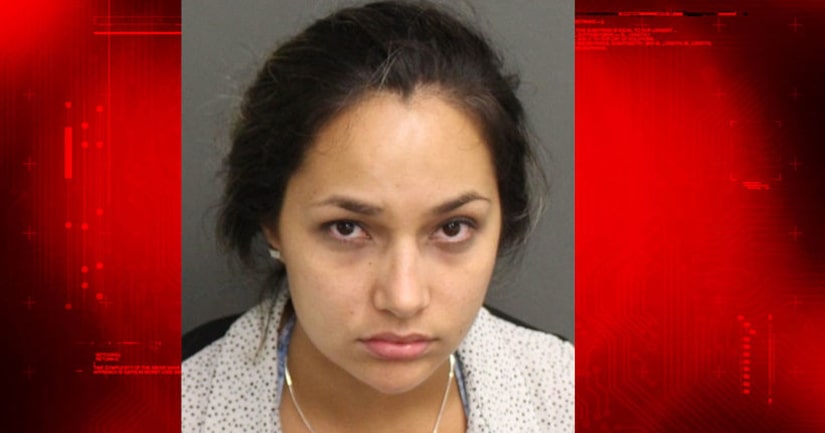 ORLANDO, Fla. -- (WKMG) -- A Kissimmee woman is accused of leaving her two children in a car without air conditioning while she drank at a bar on International Drive, according to the Orlando Police Department.

A woman called 911 at 10:14 p.m. Sunday and said she was concerned for the two small children, who had been in a silver Ford Focus for about an hour while their mother Larissa Rivera, 28, drank at Butikin Orlando.

"She is drunk, the mother is drunk," the woman told the 911 operator.

When an officer arrived minutes later, she found the Ford Focus in the parking lot with two children in the back seat, according to the affidavit.

"I opened the driver side rear passenger door and was greeted with a little girl (approximately 5 years of age) crying hysterically. She quickly calmed down once fresh air came upon her," the officer wrote in her report.

A boy, approximately 3 years old, was also in the vehicle, the affidavit said. Both children were sweating and hot to the touch, according to police. The air conditioning was not on and the children didn't have any food or water.

Rivera told News 6 over the phone that the children were very comfortable in the car at 10 o'clock at night. She said she took them to Butikin to have dinner, put them in her car when they became tired, and left the A/C on. She turned off the A/C when they complained they were cold, Rivera said.

Rivera said she left the children alone for only half an hour and the whole time she and friends at the bar were able to see the children in the car from inside the bar through the windows of the bar.

Rivera claimed she and friends checked on the children every few minutes.

While police were on the scene, Rivera came outside and said the children, both dressed in long-sleeved pajamas, were hers. She said bar patrons had been checking on the children while she drank, the report said.

The officer said that Rivera smelled of alcohol, her eyes were glassy and she was repeating herself.

Rivera admitted to News 6 she had been drinking, but said she asked the children's godmother to come pick them up. Rivera also admitted a friend urged her to take the children home, but countered that the children were fine.

She was charged with two counts of leaving a child unattended in a motor vehicle.