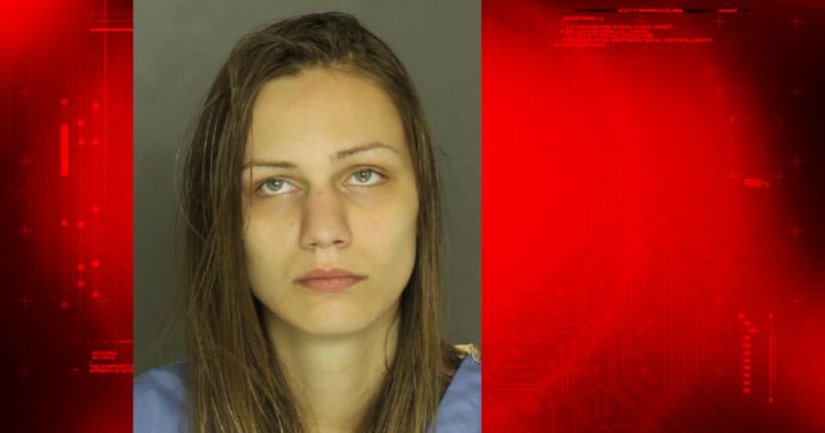 YORK COUNTY, Pa. -- (WPMT) -- A woman turned violent Wednesday afternoon after York Area Regional Police Department officers told her that she was to be arrested due to an outstanding felony warrant.

Alexa Lauver, 21, and a small baby were sitting at the edge of the yard in the 3900 block of Tunnel Hill Road around 1 p.m. when police arrived following a domestic assault call. Lauver told police that she had a broken hand from a domestic incident that occurred several days ago with a man named “Joe” — her hand was swollen while the knuckles and palms were bruised, according to the criminal complaint.

One officer then went inside to speak with the man, identified as Joseph Buehler. Buehler told the officer that an argument stemmed from Lauver meeting his relatives for the first time. The criminal complaint states that Lauver was kicking Buehler in the foyer and on the kitchen floor. No marks were seen on Buehler except for a cut that he said was from a previous incident. He then told police that he did not want to see Lauver get arrested, he just wanted her to leave the residence.

The police corporal then informed an officer of Lauver's arrest warrant from May when she sent a 15-year-old explicit images and had sexual contact with him. At that point, she was told to contact a relative or someone that can take custody of her child, who is less than a year old. After failing to find someone, police contacted Child & Youth Services.

The complaint says Lauver was walking from room to room asking the officers to stay in the dining room. She then went into the kitchen, sat on a chair and was told she was under arrest. After using explicit language toward the officers, Lauver kicked them as they were attempting to handcuff her. One officer was struck in the side and chest while another was kicked in the groin. The officers then took her down to the floor where she continued to kick and flail. Ankle restraints were placed on Lauver after being told numerous times to stop resisting, according to the complaint.

FULL STORY: Woman turns violent toward police after being told a warrant was out for her arrest - WPMT