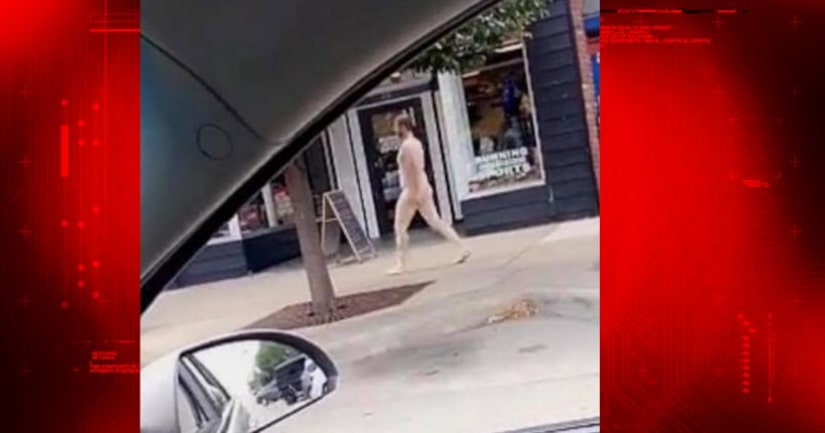 LAWRENCE, Kan. -- (KNXV) -- A man in Lawrence, Kansas was arrested for walking naked through the streets twice in the same day.

According to a statement from Lawrence police, officers found the 34-year-old man walking nude in downtown Lawrence at about 2 p.m. local time Sunday. He was taken into custody and cited for indecent exposure.

About two hours later, Lawrence police received another call from a taxi service about a man who was picked up from the Douglas County Jail. The driver said the man couldn't pay for the fare and when he arrived at his destination he took off his clothes and left the vehicle.

Police said when they arrived on the scene they found the same man nude. He was arrested and taken to the Douglas County Jail again.

Waiter Zach Ramaley noticed Carlson walking down the street naked on Sunday while working the lunch tables at Zen Zero.

"I didn't see his lower half because of the way you could see out the window," he explained. "I said, 'This guy is walking around shirtless.' Then I caught through the corner of my eye that he is not shirtless."

After realizing Carlson was naked, Ramaley said he and other customers couldn't believe the scene.

"There was a couple families on college visits that came in from outside of town asking if it was normal," he explained. "He just was dead straight looking forward like he was going somewhere. It was crazy. He looked determined to make some sort of point."

Ground Transportation Services driver Matt Stockdale was the one who picked up Carlson at Douglas County Jail after the first arrest on Sunday.

Stockdale said Carlson did not tell him why he was there and the two engaged in light conversation.

"He seemed okay," Stockdale explained. "He talked to me. He carried on a small conversation with me."