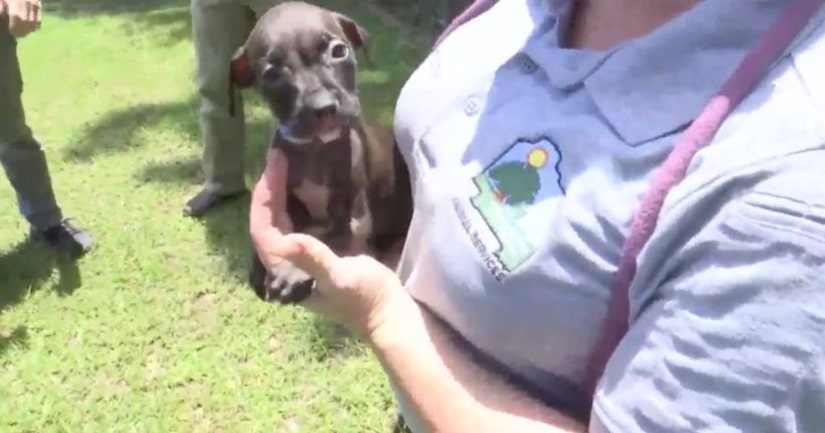 WALDO, Fla. -- (WJXT) -- Six puppies left for days in a crate filled with their own feces and urine were among 12 dogs found Tuesday in "extremely horrific" condition at a home in Waldo, the Alachua County Sheriff's Office announced Thursday.

Animal Services personnel have been working around the clock since the malnourished dogs were found to save the animals, director Ed Williams said. They have also been working to gather evidence that might lead to animal cruelty charges.

According to Williams and Alachua County Sheriff's Office Sgt. Chris Sims, the dogs were found in "deplorable, emaciated condition" at a Waldo home after Animal Services received complaints from neighbors about barking and "squealing noises" that didn't sound right.

One of the neighbors who called in the tip said he's a dog lover and couldn't believe what he was seeing.

"The one dog was so -- I don't know how someone could have a dog like that," Charles Lewis said. "They were on a chain. They were wrapped up. It was just too much."

Lewis said he heard the dogs screaming and crying the night before he called and said if he heard the noises in the morning he was going to go over to investigate. What he found horrified him: dogs that were nothing but skin and bones.

An Animal Services investigator followed up on the complaint about 11 a.m. Tuesday and found several dogs at the property chained in the yard on a hot day with no food or water. He called in the sheriff's office to help, and a search warrant was obtained about 9 p.m.

They said the dogs were emaciated, had skin issues and had suffered chemical burns from being left for days in their own excrement.