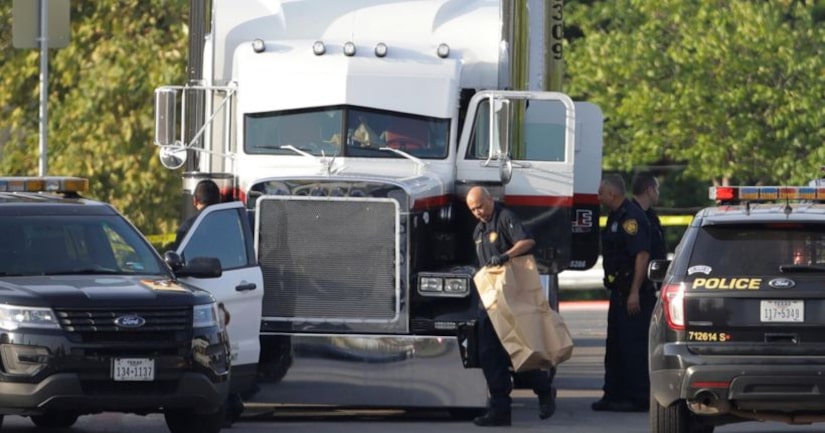 SAN ANTONIO -- (KABB) -- Authorities are investigating after 8 people were found dead inside a tractor-trailer in a Southwest Side Walmart parking lot in the stifling summer heat in what police are calling a horrific human trafficking case. The San Antonio Fire Department arrived on scene at the Walmart located on Interstate 35 and Poteet Jourdanton Highway just after 12:30 a.m.

San Antonio Police Chief William McManus said a Walmart employee called authorities late Saturday night when a person from inside the truck walked into the store to ask for water.

Eight people inside the trailer were pronounced dead at the scene. The victims were both men and women in their 20's and 30's along with two school-aged children.

San Antonio Fire Chief Charles Hood said 30 other people inside the trailer were transported to area hospitals with extremely critical or serious condition, and eight other people with less severe injuries including heat stroke and dehydration. The truck didn't have a working air conditioning system despite blistering temperatures that topped well over 100 degrees.

“They were very hot to the touch. So these people were in this trailer without any signs of any type of water,” said Chief Hood. “It was a mass casualty situation for us.”

“To me it's just sad. It's horrific,” said Debora Arriaga, who live near the Walmart. “We heard a 'bang' and we heard people talking in Spanish, and I figured it was a car accident.”

Chief McManus went on to say there were some people who survived the trip, and they were picked up by people in the parking lot. Investigators checked store surveillance video, which showed vehicles had arrived and picked up other people from the tractor-trailer.

"We're very fortunate there weren't 38 of these people locked inside that vehicle dead," said Chief Hood.

“We are looking to determine the origin of this horrific tragedy,” said Chief McManus.

The driver of the truck, who has not been identified, is in custody. He faces both state and federal charges. The Department of Homeland Security is assisting in the investigation.

"We are looking at a Human Trafficking crime here," added McManus.