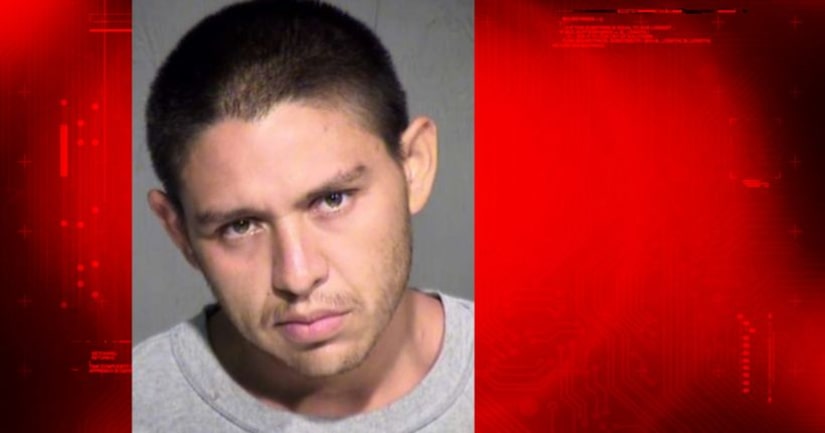 PHOENIX -- (KNXV) -- A juvenile witness was forced at knife point to clean up after a brutal murder in Phoenix.

Phoenix police report that on June 26 they were called to a home near 16th and Adams Streets where they found a partially wrapped body of a man in a bathtub.

Fingerprints identified the victim as Guadalupe Avena Castaneda. An autopsy revealed he was killed by assault and asphyxiation. Officers found the victim 'hog tied' with a belt, electrical cord, and shoelaces. They also reportedly found blood in the bathroom and cuts to the victim's face and head.

The next day a juvenile witness came forward saying a man he knew as 27-year-old Jovino Carlos Schroeder invited him into the home for some food. Inside he saw another man, who he did not know, sitting on the sofa. Instead of getting food, Schroeder allegedly sat between the two and 'glared at them.' This made both of them uncomfortable and when they got up to leave Schroeder reportedly started beating Castaneda.

Schroeder allegedly continued to beat him even after he was unconscious, saying, "This is what you get for touching my niece!" When the witness tried to leave, Schroeder put a knife in his face and ordered him to help him bind Castaneda and put him in the bathtub. He also forced him to clean up the blood in the home.

Police say there is no evidence Castaneda and Schroeder knew each other except for living in the same neighborhood. Officers are also unaware of the sexual assault Schroeder mentioned.

Police say the witness was visibly shaking when relaying to them what had happened.