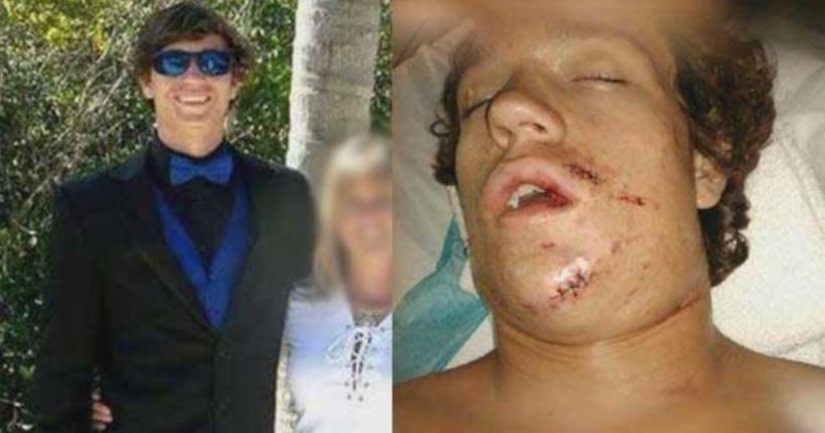 CAPE CORAL, Fla. -- (WBBH) -- A North Fort Myers teen was brutally beaten in a vacant Cape Coral field over the weekend, and the group responsible is still on the loose.

Nineteen-year-old Tanner Mounce barely made it out of a party alive this weekend after he told police he was jumped by a group of teen boys he didn't know. The group stomped on his face and head until his jaw ripped out of the socket on both sides.

The Mounce family's attorney couldn't let them speak on camera. However, they said the teen has a long road to recovery ahead of him after already undergoing reconstructive surgery.

His jaw has to stay wired shut for several weeks.

Mounce told police a group of teenage boys mistook him for someone else and began beating him in a vacant field behind 2519 NW 20th Terrace in Cape Coral, where teenagers were gathering at on Saturday night.

"It sounded like I was at a bar that was packed full of people, that's how many people were over there. It was out of control. There were way too many kids." Janice Davis said.

Davis thought about calling the police but changed her mind, thinking it had to be adults partying nearby.

Mounce said none of the other teens at the party called for help. He tried to crawl under his truck for protection while he was being attacked, but his assailants dragged him back out.

"There was malicious intent there as far as I'm concerned," Davis said. "They did exactly what they wanted to do. They probably wanted to kill him."