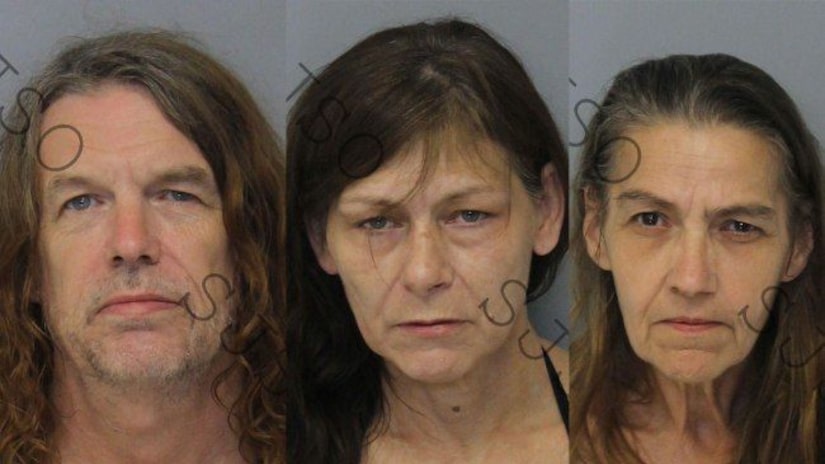 ST. JOHNS COUNTY, Fla. -- (WJXT) -- Three people face drug charges after a 6-year-old boy was left alone without shoes at a rest stop off Interstate 95 south of State Road 206 in St. Johns County over the weekend.

Courtney Price, of Jacksonville, dialed 911 Saturday morning after the distraught child approached her car, saying he was lost and needed to find his grandparents, according to an incident report. The boy said he'd been looking at magazines and when he looked up they were gone.

“He looked like he'd been crying. The gentleman walked around my car with the kid trying to find a white van, and he ended up walking off. The kid came up to my window, and he was knocking on It, and he had tears running down his face,” Price said.

A responding deputy left several messages for the boy's grandparents but never got a return call, according to the report. Later, a dispatcher said the boy's relatives had gotten in a traffic crash and were heading back to the rest area.

Shortly after, the minivan pulled into the parking lot and the adults -- 62-year-old James Morey, 56-year-old Charlene Pitts and 55-year-old Andrea Yantone, all of Columbus, Ohio -- approached the deputy's vehicle.

It was at that point that the trio appeared to be showing signs of impairment, though they did not smell of alcohol, according to the report. The report noted that Yantone had dilated pupils, was sweating badly and was speaking and moving sluggishly.

During a search of the minivan by a K-9 unit, deputies found two containers of heroin as well as miscellaneous pills. The trio was arrested on charges of drug possession, possession of a controlled substance without a prescription, possession of drug paraphernalia and contributing to the delinquency of a child.

“This is an older generation who are usually very responsible, especially when it comes to younger people,” News4Jax crime and safety analyst Gil Smith said. “That shows how much the addictive nature of heroin can affect someone's decision making at any age.”