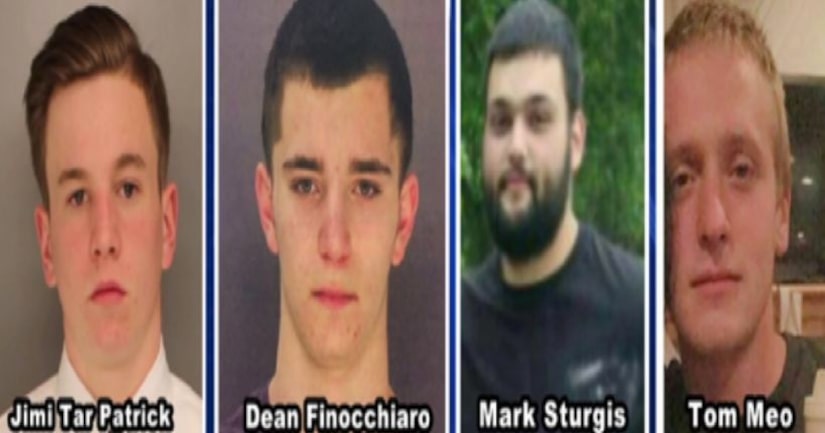 Local and state investigators, as well as the FBI and US Marshals, are involved in a massive search for the four missing men in an area north of Philadelphia.

Jimi Patrick, 19, of Newtown Township, went missing Wednesday. The remaining three — Tom Meo, 21, of Plumstead Township, Mark Sturgis, 22, of Pennsburg and Dean Finocchiaro, of Middletown Township — were last seen Friday. His age has been reported as both 18 and 19, in various releases.

Bucks County District Attorney Matthew Weintraub said Tuesday that they were in an “all hands on deck” investigation of a 90-acre property in Solebury Township.

About 40 to 50 people were helping in the search of the property, Weintraub said.

“I am still encouraged by the pace of the investigation, but as you can imagine, it's just massive in scope,” he said.

“Take the biggest (investigation) you've ever seen and multiply it by a million,” Weintraub added later.

Investigators on Tuesday continued searching the Solebury Township property, which is owned by Antonio and Sandra DiNardo.

Cosmo DiNardo, 20, whose parents own the property, was arrested Monday on an offense dating from February. The charges do not relate or pertain to this case, Weintraub said.

DiNardo was charged with possession of a firearm. He was prohibited from possessing a firearm because he was known to be suffering from mental illness and had been involuntarily committed to a mental institution for inpatient care, according to an affidavit supporting the charges provided by the district attorney's office.

He was released Tuesday evening, after his father posted 10% of his $1 million bail in cash, according to the Bucks County District Attorney's Office.

Men may have known each other

Patrick was last seen at 6 p.m. Wednesday and was reported missing the next day after he had no contact with friends or family and didn't show up to work, according to Newtown Township police.

Meo and Sturgis were last seen together Friday night near the Doylestown area in Bucks County, CNN affiliate KYW-TV in Philadelphia reported. Sturgis' father had said the two are friends, according to the station.

Finocchiaro got into a vehicle around 6:30 p.m. Friday and hasn't been seen or heard from since, according to the Middletown Township police.

Authorities said the four men may know each other, Weintraub said, but are working to confirm that information.

When asked if foul play was involved, he said, “It sure would seem so.”