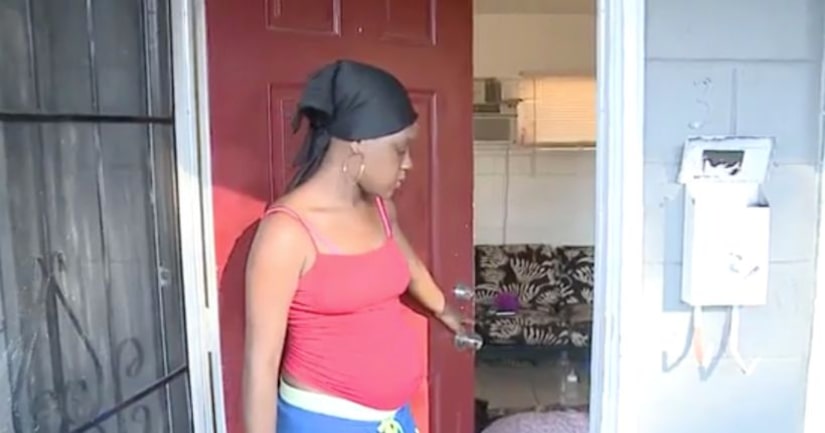 SACRAMENTO -- (KTXL) -- With her sleeping 18-month-old behind closed doors just a few feet away, a pregnant Zityrua Abraham says she endured the scare of her life at the hands of Sacramento police.

"And I told them. I have high risk. I could lose my kid. They didn't care about that. They still was doing what they were doing," said Abraham said.

What Abraham says armed officers were doing as she sat outside her apartment with family on Lampasas Avenue Sunday, was incorrectly charging into her home -- unit number three -- when they were really after someone in unit 2 in an adjacent building.

As she rushed forward and tried to warn them her sleeping toddler was inside, she says they showed no regard for the baby she's been carrying for seven months, grabbing her arm and throwing her down on her stomach.

"The doctor said the way that I landed, my body twisted the wrong way 'cause my left side hurts, and I landed all right here on my right side," she said.

It sent her into frightening contractions.

Neighbors say they couldn't believe what they were seeing.

"She came this way, officer grabbed her by her arm and dropped her and where did she land, she landed on her stomach right here, and she rolled over," said Robert Carpenter.

After a trip to the emergency room, Abraham now has a follow-up appointment with her OB/GYN to double check the health of her unborn son.

She also has a list of badge numbers and car numbers for the officers she says didn't act professionally or compassionately.

She copied them down while waiting for the ambulance.

Commenting off-camera Monday, Sacramento police confirmed to FOX40 that they were on Lampasas at midday Sunday, pursuing a car thief.

They say though it wasn't the original unit they intended to target, a man matching their suspect's description ducked into Abraham's apartment and they followed.

According to Abraham, her mom's boyfriend had stepped inside to get a glass of water, and while she tried to ask police what they were doing -- as she was being thrown to the ground -- other officers split part of her door by kicking it in.

Neighbors nailed it back together while she was in the hospital so she could lock it.

Abraham says no one associated with her household is the subject of any warrant or is on probation or parole, something she feels officers should have known before they raced in, knocked her down and pointed guns at her son.

No arrests were made as a result of the operation on Lampasas.

Officers maintain they were after a known, named suspect but are reviewing incident reports and body cam video to determine just what happened.