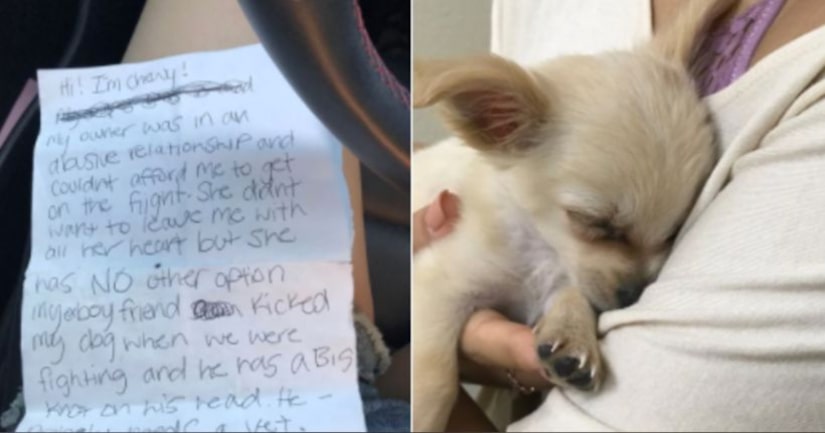 LAS VEGAS -- (KRXI) -- A 3-month-old puppy was abandoned inside an airport bathroom over the weekend with a heartbreaking note from its owner.

The miniature Chihuahua was left with a handwritten note from the dog's owner telling a tale of domestic abuse and the owner's rush to escape her abuser.

The note reads: “Hi! I'm Chewy! My owner was in an abusive relationship and couldn't afford me to get on the flight. She didn't want to leave me with all her heart but she has NO other option. My ex-boyfriend kicked my dog when we were fighting and he has a big knot on his head. He probably needs a vet. I love Chewy sooo much – please love and take care of him.”

Someone found Chewy and he ended up in the hands of a local dog rescue and is reportedly doing okay.

“This one really got to me. You could tell by the way the note was written that the woman was in dire stress and she didn't want to give him up and she couldn't take him with her,” said Darlene Blair, of Connor & Millie's Dog Rescue.

The story highlights the unintended consequences of domestic violence.

“There's absolutely an option out there,” said Lori Nelson, who works with Noah's Animal House, a safe place that keeps sheltered women and children near their pets.

The boarding house based in Las Vegas has helped more than 1,000 pets over the last 10 years and has plans for expansion in Reno.

“The animal is equally a member the family as anyone else and it's vital that when you're leaving a domestic violence situation that your pet can come with you,” said Nelson.

Airport officials want to remind pet owners that the airport is no place to leave an animal since you don't know when or who might pick it up.