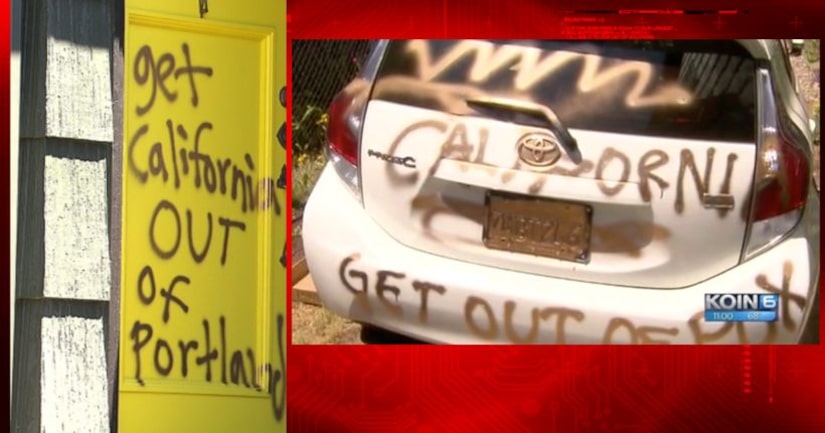 PORTLAND, Ore. -- (KRON) -- A couple from California, who relocated to Portland 4 months ago, woke up Sunday to find their car and house vandalized.

Messages including “Get California out of Portland” and “Move back” were spray painted across the house and car of Jessica Faraday and Preston Page.

Their car was also keyed.

The couple filed a police report, however, they said they an idea of who may have tagged their property.

Jessica Faraday and Preston Page were backing out of their driveway Saturday and had a road rage incident with another driver in the Northeast Portland neighborhood. The driver began to yell at them, saying “go back to California.”

The couple said they assume the vandalism was in retaliation from Saturday's incident.

Page told KOIN they have redone everything since moving in and had just repainted the outside of their home 2 weeks ago.

The neighborhood is relatively quiet and some neighbors have lived in the area for 20, 30 years, according to Page, so he was shocked to find their property vandalized.

Page said, “I'm definitely surprised someone would go this far.”

Despite the incident, the couple still loves Portland and is happy they've moved to the city.