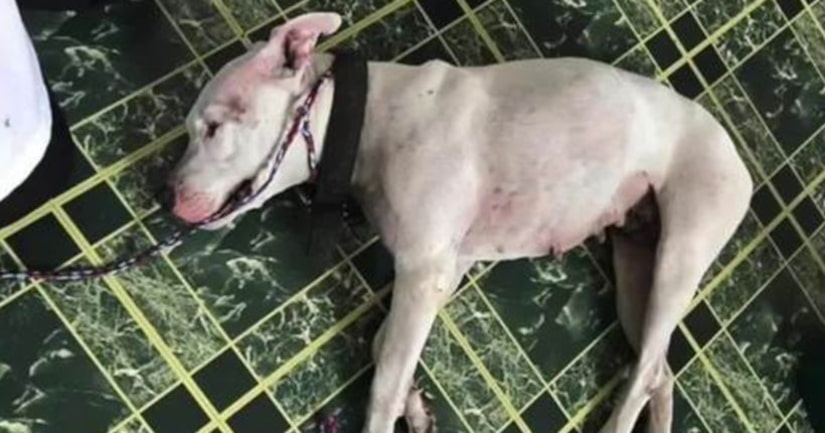 DETROIT -- (WXYZ) -- Good Samaritans rescued a white pit bull, believed to be about 5 years old, after two men were reportedly seen on bikes with the dog running behind them before she couldn't keep up and collapsed.

The men then tried to get the dog to stand again by allegedly beating her, and when she couldn't stand back up, they left her lying on the ground.

This happened Thursday evening near St. Paul Avenue and Bellevue Street on Detroit's east side.

The Good Samaritans rescued the dog Thursday evening. They turned her over to Detroit Dog Rescue (DDR) Friday and she still appeared to be in a lot of distress as she was rushed to Oakland Veterinary Referral Services in Bloomfield Hills where she remains sedated.

Vet techs named the dog Penelope and we're told her pain appears the result of a number of issues that include heat exhaustion and problems with her uterus.

It appears the dog has had an unhealthy number of litters and her uterus will have to be removed. Penelope will remain in emergency care at OVRS over the weekend.

Detroit Dog Rescue workers and volunteers will be investigating in hopes of finding the men who reportedly left Penelope to die.

Anyone with any information is urged to send DDR a message through Facebook or call 313-458-8014.

Animal cruelty can also be reported by calling Crime Stoppers at 800-SPEAK-UP.

Detroit Dog Rescue is a non-profit organization that is able to provide shelter and veterinary care to rescued animals thanks to donations.

FULL STORY: Men on bikes ran dog until she collapsed, allegedly beat her before leaving - WXYZ