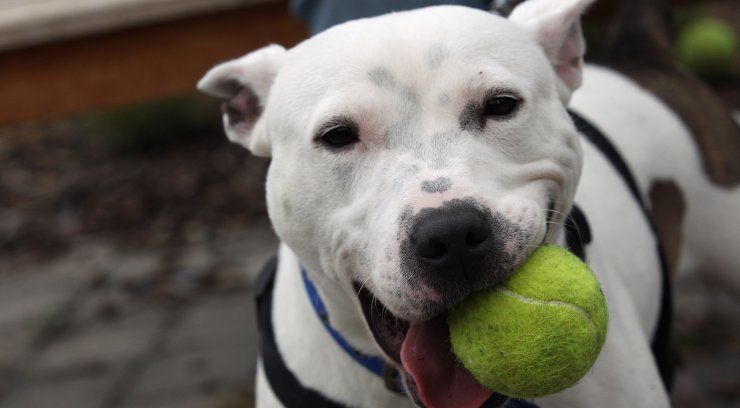 (CNN) -- Melody Jackson’s beloved grandmother Eleanor was in the kitchen when she fell.

Her cries for help went unheard, and her feeble attempts to lift herself up were unsuccessful. At the time of the fall, Eleanor was in her 90s, and it was some 20 years ago, but the memory remains with Jackson to this day.

“She had to wait for her neighbor to get home from work to get up,” Jackson said. “The family obviously was terrified, so we bought her one of those necklaces, those alert necklaces. … Well, she didn’t like wearing it.”

However, if Eleanor had a small lapdog at the time, the dog not only could have been a companion, it could have helped her when she fell, said Jackson, an associate professor and director of the animal-computer interaction lab at the Georgia Institute of Technology.

From high-tech wearable vests for dogs to a dog-friendly touchscreen that works like a telephone, Jackson and her colleagues at Georgia Tech are developing and testing new ways for canines to communicate with humans during a medical emergency.

Since last year, when CNN previously interviewed Jackson and her team, they have tested a touchscreen that dogs can use to call or text.

Dogs could be trained to activate a device if their owner falls or if they hear a verbal cue telling them to “get help,” said Jackson, who founded the FIDO project at Georgia Tech to research ways to improve communication between dogs and humans.

“The dog could go over to a touchscreen and touch a series of icons on the touchscreen and call 911 with your location,” she said. “We think that, literally, this could change lives, make lives so much better, and be a life-saver.”

Teaching dogs to ‘talk’ with technology

Jackson, who also is a dog trainer, said that both companion pets and service dogs could easily be trained to use technology to communicate when their handlers need help.

“What we realized a few years ago is that service dogs and working dogs in general have a lot of information that they need to impart to their handlers,” Jackson said.

“A medical alert dog may need to summon 911 for their person who is having a seizure. Or a military working dog might need to tell their handler what kind of explosive they just found,” she said. “The dogs had no way reliably to do this. So we started focusing on technology to allow working dogs and specifically service dogs to communicate.”

Jackson and her colleagues have trained her border collie, Sky, and other dogs to approach a television-size touchscreen surface and use their noses to push three buttons when they hear the command “help.”

Once the buttons are pushed, a computer connected to the touchscreen can be programmed to call anyone, such as a family member, a doctor or even 911, said Clint Zeagler, a research scientist and instructor at Georgia Tech, who has helped design the dog-friendly technologies for the FIDO project.

The buttons on the touchscreen appear in blue and yellow because dog vision is somewhat similar to being red-green colorblind, Zeagler said. He added that there are three buttons on the screen to eliminate the chances of any accidental calls being sent if the dog bumps the screen once or twice by mistake.

The researchers also have developed wearable technologies for dogs to use to communicate with humans. The wearables are designed as vests and are equipped with either a chew toy for the dog to bite on command or a braided rope for the dog to tug on command. Both actions activate a sensor in the toy or rope.

Once activated, those sensors signal a computer in the back of the vest to make a phone call, send a text or even broadcast an audio message. An automated audio message, sent through a speaker on the vest, could let passers-by know that the dog has called for help or that the dog’s handler needs more assistance.

For instance, some seizure alert dogs are trained to sense the onset of a seizure, push their handlers against a wall to support their fall and then lick the face of their handlers during the seizure, Jackson said.

“But what if that dog could not just do all of that but reach around and tug a sensor on their vest that calls 911, with their GPS location, and also has a speaker that says, ‘Excuse me, my handler is having a seizure; please stay back,’ ” Jackson said.

“We want to be able to let these dogs communicate with humans very specifically and very clearly so that even a person who isn’t a dog trainer will understand what’s going on,” she said. “If the dog runs up to you and a speaker says, ‘Excuse me, my handler needs your attention; can you please follow me,’ OK, that’s clear.”

Jackson also said that one of her former graduate students, Vincent Martin, and his guide dog Karson were in a situation a few years ago during which technology could have helped. Martin is blind.

“He was walking between classes one day on a very familiar path, and his dog stopped,” Jackson said. “The dog wouldn’t move, and so he took out his cane and he felt around. He couldn’t feel anything.”

Since Martin didn’t feel anything in their path, Jackson said, he gave Karson a correction tug on the leash to encourage him to keep going. Karson reluctantly followed Martin’s command.

“They both stepped into wet cement,” Jackson said. “The dog had no way to tell him ‘there’s something in our path that I can’t communicate to you.’ ”

Jackson and her colleagues hope that dog-friendly wearables and touchscreens soon could be commercialized for service animals around the world to use. Currently, the technologies are still research prototypes and have some limitations, Jackson said.

“These dogs love this work. The bond between a person and a service dog is unlike any other,” she said. “We are just so proud that we can actually work in this area and hopefully create some of these technologies to keep that going.”

FULL STORY: How your dog could call 911 in an emergency - WPIX