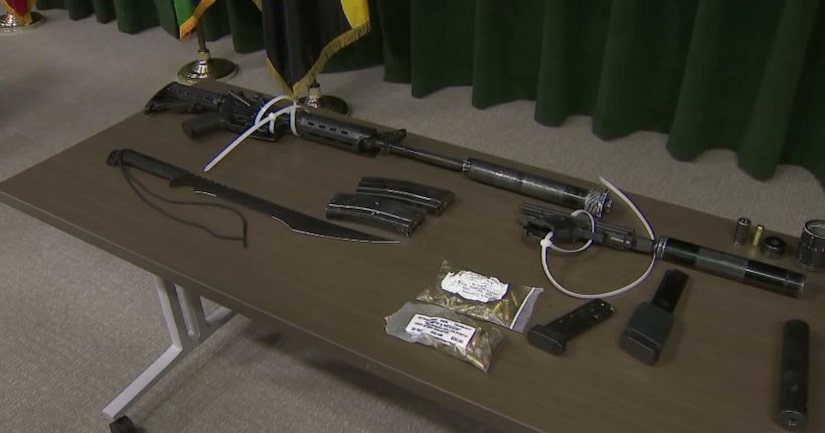 LOS ANGELES -- (KTLA) -- A man was arrested Wednesday after deputies saw him urinating in a planter and found him to be in possession of a cache of weapons at a Gold Line station in Pasadena.

Christopher Goodine, 28, was taken into custody after two Los Angeles County Sheriff's deputies noticed him urinating in a planter at the Sierra Madre Gold Line Station in Pasadena.

After searching his duffel bag, the deputies found a loaded AR-15 rifle with two loaded 30-round magazines, a loaded .40-caliber handgun with extended magazines, a machete-type knife, a rope, several rounds of live ammunition and a notebook with “unidentified writings,” Sheriff Jim McDonnell said at an afternoon press conference.

A preliminary investigation did not indicate a link to terrorism, but officials said it was too early to determine what Goodine's plans included.

“When you have someone walking around with this type of weaponry, this much ammunition, the outcome would not have been good no matter what he was going to do,” McDonnell said. “Their proactive actions are commendable and may have saved a lot of lives on the transit system this afternoon or in our communities.”

Deputy Katherine Zubo, one of the arresting deputies, said Goodine was not acting suspicious or displaying erratic behavior. Instead, she described him as “a transit patron with a duffel bag,” who was only noticed because he was standing on the sidewalk and urinating in the planter.

Goodine was booked at the East Los Angeles Sheriff's Station and was being held on $50,000 bail.

The investigation was ongoing.