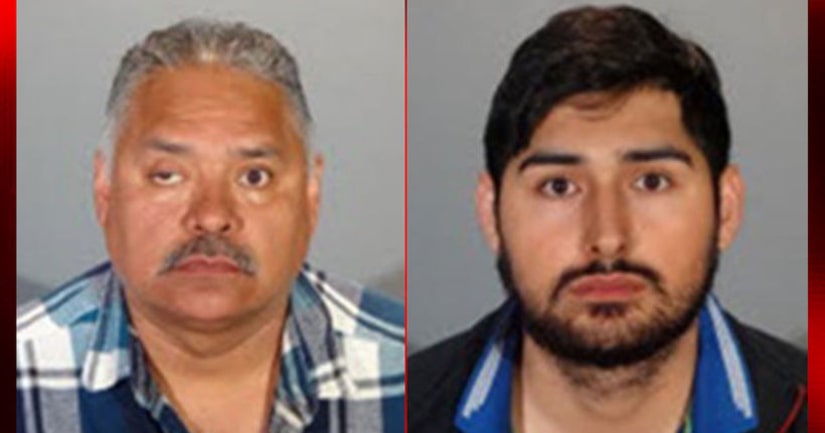 LOS ANGELES -- (KTLA) -- A 48-year-old man and his teen son have been arrested after allegedly trying to sell hundreds of thousands of dollars' worth of cocaine out of a Highland Park home where an unlicensed day care was being run, according to local authorities and federal court documents.

A confidential informant led investigators to the father, Felipe Talamante, in May, a federal Drug Enforcement Administration agent's affidavit states.

Talamante then allegedly tried to sell an undercover California corrections agent 20 kilograms of cocaine “direct from Mexico” for $430,000, and a meeting was arranged at Talamante's home in the 5200 block of Marmion Way.

“Meth is a poor man's drug. My specialty is cocaine,” Talamante told the undercover state agent, according to the affidavit.

When the exchange was set to take place with Talamante and his 19-year-old son Miguel Talamante, the agent saw several children between the ages of 2 and 7 at the home, which is near Monte Vista Elementary School.

The cocaine was delivered several hours later, and authorities promptly raided the home. Thirteen people were inside, including three children, the affidavit states. A K-9 found the odor of narcotics in several areas, as well as seven packages of cocaine and a digital scale.

Los Angeles City Attorney Mike Feuer has meanwhile filed a lawsuit seeking an injunction against Felipe and Garcia Talamante, who own the Highland Park home. He announced the lawsuit, which seeks to have the day care shut down, on Tuesday.

“For at least the past two years the property allegedly has been known by law enforcement as a site for the distribution of narcotics and heavily frequented by drug users and buyers,” Feuer said in a news release.

Cocaine was found in a part of the home where children slept, the release stated.

"Kids taking naps, or playing – and cocaine is right there," Feuer said at a news conference Tuesday.

The city's suit also seeks the closure of the property, monetary penalties, recovery of the costs of the investigation and attorney's fees.

The drugs found at the home had a street value of at least $2 million, according to the task force, which worked with Feuer on the civil suit as well.

The home was searched in 2015, when 20 kilograms of cocaine were also recovered, Feuer's news release stated. It's not clear if that raid led to any charges.