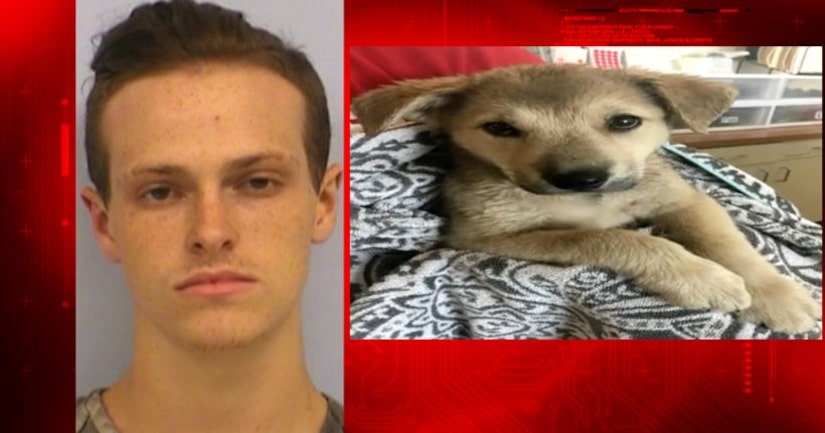 MANOR, Texas -- (KXAN) -- Manor police officers and a deputy from the Travis County Sheriff's Office rescued an eight-week-old puppy named Annabelle from a locked car in a Wal-Mart parking lot Saturday afternoon, according to a report by the Manor Police Department.

It happened at about 4:08 p.m. at the store at 11923 US Highway 290 near FM 973 when a caller reported seeing a blond-colored puppy inside of a Ford Focus that was not running just as the temperature in Austin hit 100 degrees for the first time this year.

When police arrived, they said they could hear the puppy crying and panting and see it trying to hide under a rear passenger seat in an attempt to find shade.

The sun roof on the car was partially opened, so officers said they were able to use a tire iron to reach through and hit an unlock button to open the door and remove the puppy.

Officers said that the puppy was overheated, infested with fleas, had several lesions and appeared to be in poor condition.

After they rescued the puppy and were giving her water, police said the owner Chandler Bullen, 20, returned to his car from the store at about 4:22 p.m. Police said he told them that he'd been inside shopping for at least 30 minutes. He said the puppy is a mix of Mexican wolf and German Shephard and that her name is Annabelle.

“The officers just spoke with him and asked him why, you know, they left the animal in there with the windows up and the extreme heat,” said Manor Police Sgt. Randall Anderson. “And his reaction was, basically, he didn't want to waste gas.”

“It's sad to hear because they're defenseless much like children, Anderson said. “You know, they can't get out of the car by themselves, and it's kind of just stuck in there.”

They arrested Bullen on a charge of Cruelty to Non Live Stock Animals, a Class A Misdemeanor, saying Bullen “knowingly and intentionally failed unreasonably to provide necessary shelter and water for an animal in his custody.”