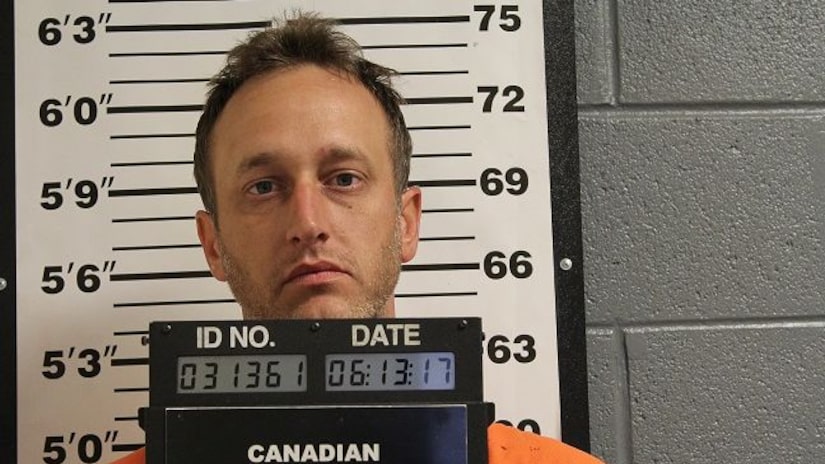 CANADIAN COUNTY, Okla. -- (KFOR) -- An Oklahoma man is accused of sexually assaulting a young teen at a sleepover earlier this year.

On Monday, June 12, investigators with the Canadian County Sheriff's Office arrested 35-year-old Jason Drylie for lewd acts with a child under the age of 16.

Officials say the mother of the underage victim contacted authorities after her daughter informed her that Drylie had sexually assaulted her.

The child told Canadian County investigators that the alleged sexual assault occurred in May 2017.

According to the child, Drylie sexually abused the young girl at the end of a party, while the child was in bed at Drylie's house during a sleep over with other children.

The child reported to investigators that Drylie had given her multiple alcoholic beverages and sent text messages encouraging her to consume more alcohol.

The victim also reported that she received multiple text messages from Drylie stating he would come to her bedroom to give her more alcohol.

The child said she was given so many beers that she began to feel numb and tingly.

Also located on the victim's phone was a text message from Drylie apologizing for his behavior.

Investigators located Drylie and interviewed him regarding the events at the party.

During the interview, officials say Drylie allowed investigators to conduct a forensic examination of his cellular phone.

Authorities say Drylie then admitted to getting in bed with the victim for the purpose of sexually assaulting her.

“This is a textbook example of how so many predators operate. They supply their under aged victims enough alcohol to get them drunk, and then sexually assault them. I can't tell you how thankful I am that this young girl had the courage to tell her mother what this child predator had done to her, and hold him accountable for his actions,” said Chris West, Canadian County Sheriff.

Drylie told investigators he crawled in the young girl's bed wearing only his underwear.

He also reportedly admitted to touching and kissing the child while she laid in her bed.

Investigators learned from the victim that she had to jump out of bed and run to the bathroom and lock herself inside to get away from Drylie.

“Who knows how far Drylie would have gone if this child hadn't been able to get away? I'm so glad she had the presence of mind to jump out of bed, and run to the bathroom and lock herself inside,” said West.

Drylie was arrested for lewd acts with a child and providing alcohol to a minor.

Drylie was able to post bond, and is no longer in custody.