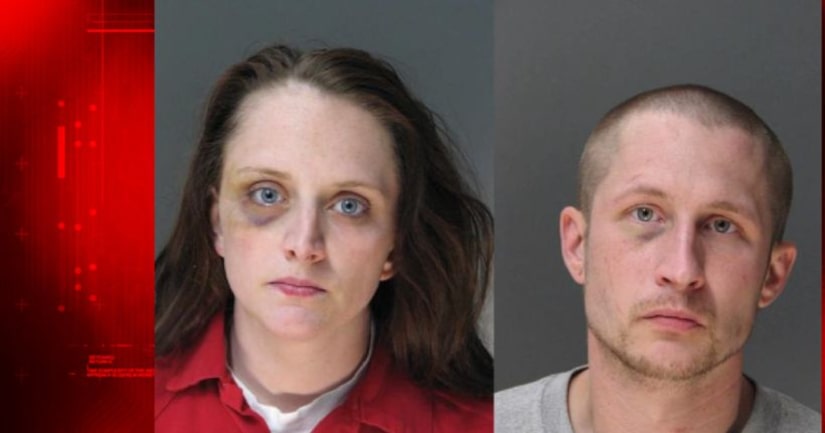 TULLYTOWN, BUCKS COUNTY, Pa. -- (WPMT) -- A judge has called the case where a Tullytown couple was sentenced to 10-21 years in prison for abusing their twin infant daughters, “one of the most horrific examples of child abuse that I've ever seen.”

By the time they were 2 months old Melissa Shales, 26, had given her daughters multiple broken bones.The girls are now 17 months old, and only recently began to walk, and they still need physical therapy.

Michael Shales, 31, did not seek medical care for injuries given to the girls by his wife, and badly tore the throat of one girl with a pair of pliers while he was on heroin. She remains on a feeding tube.

“Their two months of life with their parents was torture,” Deputy District Attorney Chelsey D. Jackman said. “Nothing short of torture.”

“I believe that both of these parents tortured their children,” McHugh said. “I don't know which is worse: to injure a child, or to fail to get a child treatment.”

Both pleaded guilty on May 22 to charges of aggravated assault and endangering the welfare of children. McHugh sentenced each to serve seven to 14 years for the assault charges, plus a consecutive three to seven years for child endangerment.

Police were called to the Shales' squalid, trash-strewn apartment on March 21, 2016, where officers found the infants malnourished and injured. Melissa Shales told police that one of the twins was having trouble breathing.

The child had a throat injury inflicted earlier in the day when Michael Shales had used pliers to retrieve a piece of gauze lodged there. Police found the baby pale and gurgling, her breathing shallow.

The apartment, meanwhile, was strewn with dirty clothes, toys, sharp tools, soiled diapers and dirty dishes, along with drug paraphernalia and unspent bullets left within the reach of the babies and their 2-year-old brother.

Michael Shales had begun the day by purchasing $120 worth of heroin in the Kensington section of Philadelphia. When he returned, Melissa Shales became so enraged that she threw the baby she had been bottle-feeding into the aluminum rails of a nearby daybed and stormed out.

Michael Shales then injected the heroin he had bought before trying to wipe the inside of the injured baby's mouth with a piece of gauze. When the gauze became lodged in her throat, he tried to retrieve it with his fingers before using a pair of pliers, puncturing the back of her throat and esophagus in the process. Police were not summoned to help the infant until after 10 o'clock that night.

The baby's injuries required her to be intubated to breathe and for a feeding tube to be inserted for nourishment. The child also was found to have a fractured femur, rib and tibia, neck injuries consistent with shaken-baby syndrome, and cuts and bruises to her vagina. The couple admitted having left her in soiled diapers for hours at a time.

About one week before police intervened, Melissa Shales had grabbed the same baby's leg while bathing her and heard a pop. Over several days, both parents tried repeatedly to pop and twist the leg back into place, possibly worsening the injury, Jackman said. Neither parent called or visited a doctor, and by the time police were summoned the child's leg had swollen to the size of a 1-year-old's leg.

Melissa Shales also admitted to having thrown the same baby forcefully into her swing after becoming angry with her husband on March 20, 2016. The baby landed hard on her left side, and appeared to be favoring that side afterward. Michael Shales witnessed the assault but, again, neither parent sought medical attention.

The baby's twin sister also was found to have two fractures to her leg, and was hospitalized on March 22, 2016. Experts at St. Christopher's Hospital attributed the breaks to non-accidental trauma, likely caused by pulling, shaking or twisting the child. Melissa Shales admitted to police that she had picked up the infant by her onesie and placed her down hard in the past.

Both children were malnourished, having gained only two pounds each in their first two months of life, Jackman said.

In a statement to police, Melissa Shales said she had injured the babies “to get back at Michael, to show him how mad he makes her.”

In court today, Melissa Shales said had she worked 40 hours per week for minimum wage while her husband stayed home and spent their money on guns and drugs. She accused him of abusive, threatening behavior toward her.

Melissa Shales also blamed her behavior on her use of methamphetamine. She said she began using the drug after the twins were born at the behest of her husband, who “told me that sex would be better” on meth. She said she “was too afraid of him” to challenge Michael Shales' own drug abuse.

“What I did to my kids was and is unacceptable,” she said. “From here on out, I wouldn't blame my kids if they never wanted to see or hear from me again.”

Addicted to opioids since 17, when he suffered severe spleen and back injuries in a criminal assault, he said the injuries and his addiction limited his ability to work. His attorney, Paul Lang, told McHugh that Melissa Shales had been physically abusive to her husband, and was trying to “deflect” blame for her violence onto him.

“Words cannot express the pain and sorrow that I have built up in my heart,” Michael Shales said. “I regret my actions, and long for the opportunity to rectify my actions.”