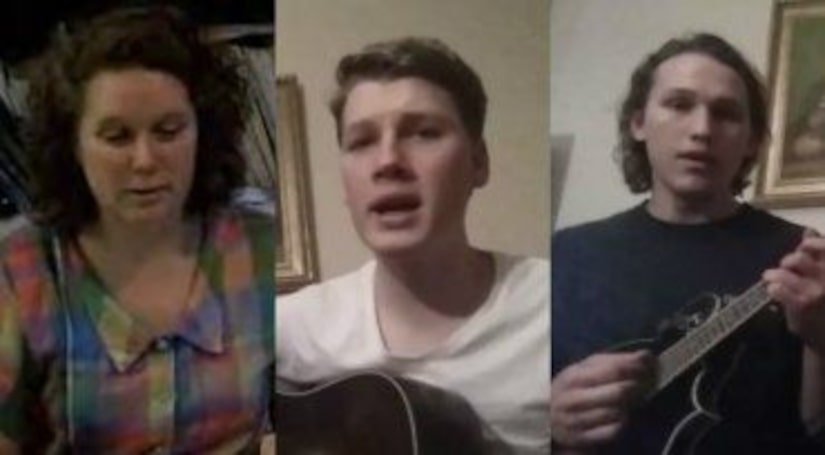 Investigators believe that, before turning the gun on himself, Jacob Stockdale, 25, killed his mother, Kathryn Stockdale, 54, and younger brother, James Stockdale, 21, inside their home on Thursday.

When deputies arrived, Maier said they discovered someone laying on the floor, and then heard a gunshot from somewhere in the home.

They discovered the bodies of Kathryn and James, and then found that Jacob had shot himself. He was taken to the hospital.

The family's father was not home at the time. Two other siblings who no longer live at the home were also not there.

Maier said that deputies have never been called to the family's home for any problems before, and they are not aware of any family issues.

The family was actually featured on reality TV show "Wife Swap" back in 2008.

During the show, it was revealed that the Stockdales were devoutly religious. They banned TV and video games and the boys had to do chores to earn tokens to listen to the radio. They also had a family bluegrass band.

Back in 2014, The Stockdale Family Band won first place in the “Heights' Got Talent” competition.

Their last performance was on Tuesday at the nearby Wildcat Ranch, where Pastor Steve Todd says he has known the Stockdales for 20 years and watched their kids grow up.

"My immediate thought was no, no, I mean that's got to be some sort of false story because there's no way that happened in that family," said Todd.

Todd says there was no sign of any problems on Tuesday.

"They have always been the most admired family, from everyone we know loves them and admires them and we have never known anybody that would have said one bad word about any of them. The kids were always great very loving extremely tight knit family," said Todd.

The Stockdale family home schooled their four children on their farm. Their online biography says the boys were asked to sign contracts to do chores on time and were rewarded with tokens so they could buy things. " The boys have little or no interaction with the outside world, and dating is out of the question," they state in their biography.

On Friday, Timothy released a statement about his wife saying: "Kathy has been my beloved wife of 32 years and a wonderful mother to our four sons. She loved nothing more than being a mother and grandmother. She had a strong love of learning and was passionate about her Christian faith, natural health, and organic farming.”

Their oldest son, Calvin, who is listed as a banjo player for the band, also released a statement about his deceased brother saying: "James, our youngest brother, has always been a catalyst of family fun. Aside from being a gifted musician, James enjoyed dancing and had a innate love of people. James was working on a business degree and hope to go into the business side of entertainment. He leaves behind many friends and a family that love him dearly.”

“My family appreciates the prayers and support we are receiving from our friends and the community. We are mourning the loss of my brother and mother and are waiting to learn more about what transpired yesterday afternoon. We thank Sheriff Maier and his staff for their help through this difficult day as well as the staff at Aultman and MetroHealth Medical Center.

“While support is appreciated we ask for privacy while our family deals with this tragic loss.”

Sheriff Maier says due to Jacob's condition, they have not yet had a chance to speak with him.

"It's hard to, you know, kind of surmise what the motive may have been. There is some speculation; we don't really want to get into that part of it but we will continue to investigate this case and try to determine if there is a motive. We just do not know at this time," said Maier.

"Regardless of man's sin, nature and how things can happen that are totally seem bizarre. God is good and he's the only one that you can really turn to and find comfort, strength, joy and peace in some craziness like this," said Todd.