BELLEFONTE, Pa. -- (WNEP) -- Investigators say a Penn State fraternity pledge's slow death at a frat party was caught on cameras. That video was shown in court on Monday.

Lawyers for the victim's family described the video as "gruesome."

Sixteen Penn State fraternity brothers were in court Monday, all facing charges connected with the death of a pledge.

Timothy Piazza, 19, from New Jersey died after falling down a flight of stairs during a hazing ritual at the Beta Theta Pi fraternity house.

Graphic video footage of the night Piazza died was shown for the first time in court Monday.

Gary DiBileo Jr. of Scranton left the Centre County Courthouse without knowing when he'll be back and if the charges against him will go to trial.

DiBileo and 15 other fraternity brothers spent over 10 hours in court listening to evidence.

"As it relates to my client, we didn't hear a lot. We certainly didn't hear anything linking him to anything regarding Timothy Piazza's death," said Michael Engel, DiBileo's lawyer.

Each fraternity brother faces charges after Piazza had a deadly fall at the Beta Theta Pi house at Penn State back in February.

"This is about Tim Piazza, and Tim Piazza died, and there should be an absolute reverence in that courtroom," said Centre County District Attorney Stacy Parks Miller.

Heated disagreements broke out while Parks Miller shared hours of evidence with the court, including surveillance video from cameras set up around the frat house.

The video captured the night 14 pledges, including Piazza, were taken through a speed-drinking event called "the gauntlet." Pledges were made to chug vodka and beer.

After consuming a lethal amount of alcohol, Piazza fell down a flight of stairs head first. Investigators say his blood alcohol level was between .28 and .36.

"He falls, gets injured, spleen, head, repeatedly. He can't protect himself from the alcohol and the injuries, and it goes on and on until he dies, and then they don't render aid at that point. They have caused that condition," said Parks Miller.

Piazza was carried to a couch where frat brothers poured beer on him, hit him, and eventually propped him on his side. Ed Gilmartin was there.

Piazza appears lifeless for most of the video, rolling on the ground and holding his head in his hands.

The 19-year-old staggered through the house, visibly in pain he fell head first several times.

In court, some of the fraternity brothers appeared distressed while watching the videos.

Piazza eventually staggered to the basement where he fell down a flight of stairs. He died two days later at a hospital.

"I believe the charges will be bound over. I feel bad for the victims that they have to come back another day," said Parks Miller.

Because court recessed without a decision, all 16 men are expected to be back in court in the coming weeks. 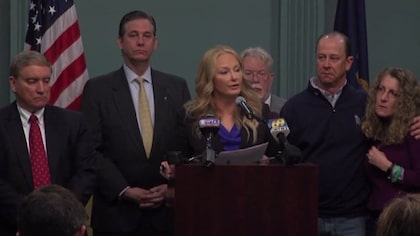