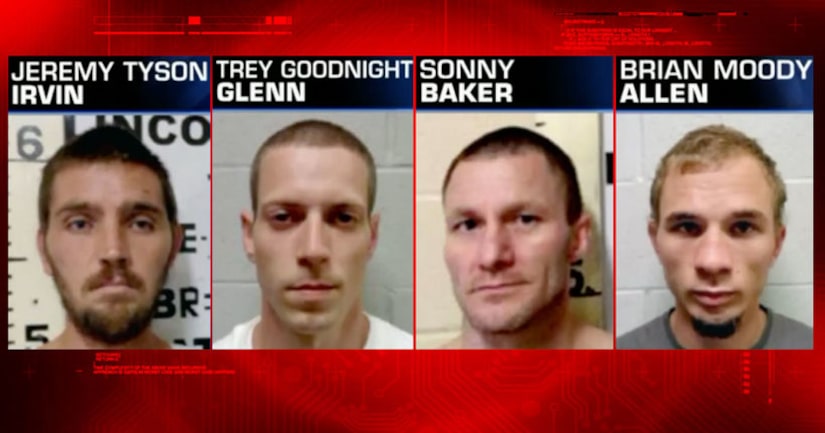 LINCOLN COUNTY, Okla. -- (KFOR) -- Authorities in Lincoln County are searching for inmates who escaped from the county jail.

Officials say that between 1 a.m. and 4 a.m. on Monday, four inmates escaped from the jail.

Investigators believe they likely escaped through the ventilation system.

However, investigators say 31-year-old Jeremy Irvin was in jail on a count of first-degree murder.

Both Moody and Baker are from the southwest part of Lincoln County.

He is from the Shawnee area in Pottawatomie County.

Irvin is a white man, standing 6'1" tall with brown hair and hazel eyes.

Residents in the area are encouraged to take precautions and to report anything suspicious to authorities.

Investigators are checking jail phone records from the past 24 hours to see if the inmates reached out to friends or family members.

At this point, there have been multiple sightings.

On Monday afternoon, the Oklahoma Highway Patrol began searching in Cleveland County after finding an abandoned Dodge pickup truck that was stolen from a Chandler home overnight.

Law enforcement officials are also searching near Chandler after a home was burglarized of cash and cigarettes there.

This is the second escape in several months at the jail.

In March, three inmates escaped from the Lincoln County Jail by crawling through a vent. Moody and Baker were a part of that group of escapees.

However, they were all captured and taken into custody a short time later.