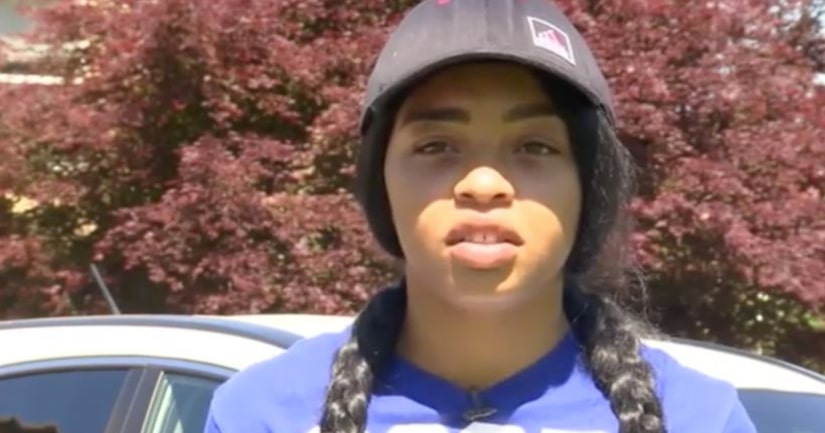 PORTLAND -- (KCPQ) -- As tears streamed down her cheeks, Destinee Mangum, 16, thanked the three strangers who intervened on a Portland light rail after a man hurled anti-Muslim slurs at her and her friend who was wearing a hijab.

Two of the men were killed. One is in the hospital after the suspect, identified as Jeremy Joseph Christian, 35, stabbed the three victims, according to police.

"I just want to say thank you to the people who put their life on the line for me," Mangum told CNN affiliate KPTV, as her voice cracked. "Because they didn't even know me and they lost their lives because of me and my friend and the way we look."

On Friday afternoon, Mangum and her friend were riding the MAX light rail when the suspect allegedly targeted them. He yelled at Mangum, who is not Muslim, and her friend, using what police described as "hate speech toward a variety of ethnicities and religions."

"He told us to go back to Saudi Arabia and he told us we shouldn't be here, to get out of his country," Mangum told KPTV. "He was just telling us that we basically weren't anything and that we should just kill ourselves."

Frightened by his outburst, the pair moved away to the back of the train.

Then a stranger intervened, telling the man that he "can't disrespect these young ladies like that."

"Then they just all started arguing," Mangum said.

By the time the light rail pulled into the next station, Mangum and her friends were ready to leave.

"Me and my friend were going to get off the MAX and then we turned around while they were fighting and he just started stabbing people," she said.

"It was just blood everywhere and we just started running for our lives."

Several passengers chased after the suspect and called 911, directing officers to his whereabouts, according to local media.

Mangum, wearing pigtails, held tightly to her mother's hand as she spoke to a KPTV reporter.

FULL STORY: Teen on Portland train: 'They lost their lives because of me and my friend' - KCPQ