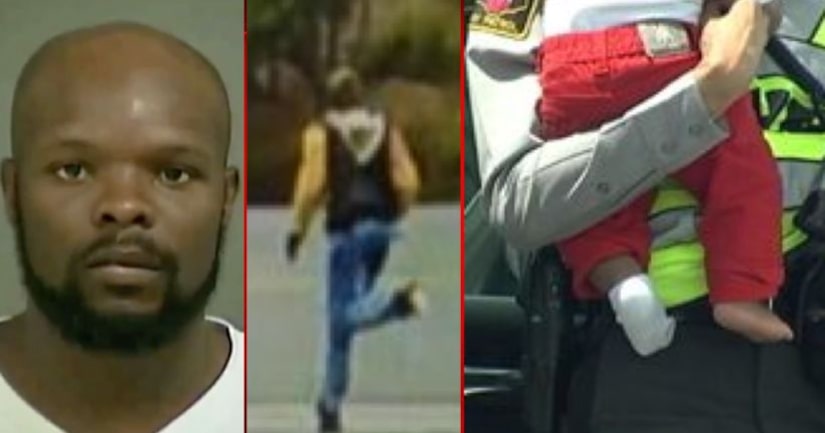 CHARLOTTE, N.C. -- (WSOC) -- A driver crashed an SUV Thursday afternoon in north Charlotte, jumped out of the vehicle and ran away, leaving his 3-year-old and a 7-month-old behind, according to troopers.

The North Carolina State Highway Patrol said troopers were performing a license check on Trailer Drive in north Charlotte. A black Chevy Tahoe, driven by Montieth Devon Willis, did an abrupt turnaround when approaching the checkpoint and drove off, according to troopers.

Troopers attempted to catch Willis but lost sight of the SUV until they came upon a crash scene involving the Chevy Tahoe on Jeff Adams Drive and Cottonwood Street.

Authorities said Willis jumped and ran from the SUV, leaving his two young children behind.

"The people from next door and the cops were already here and they got the two very young kids out and were trying to calm them down because I'm sure it was scary for them," witness Dawn West said.

Medic was called as a precaution to check the children for injuries. Both of them are OK. Troopers and police managed to keep them fed and entertained until their mother arrived at the scene.

Authorities said a surveillance camera captured Willis as he ran off and darted across eight lanes of traffic on I-85.

Troopers tracked Willis down to his mother's house nearby. There was a short standoff until authorities realized he had already changed clothes and left the home through a back door, according to troopers.

West wondered why any father would put his children through the whole situation.

"Your illegal activity is more important than these two young kids, that you put their lives in danger to run from the cops? It makes no sense to me," West said.