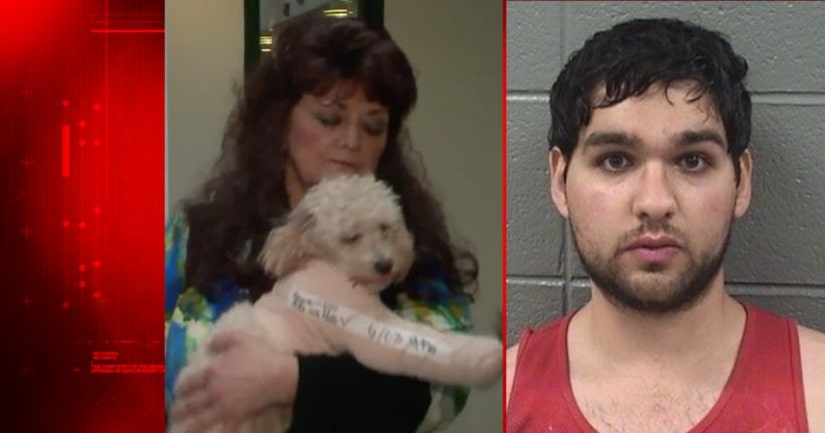 Investigators believe 22-year-old Edward Hanania falsely claimed to be the owner of two toy poodles on a lost and found section of an area Facebook page, but when the real owner came forward, things took a turn for the worse.

One of the dogs, 1-year-old Angel, survived the five-story fall. Angel's father, 6-year-old Garo, was also thrown from the structure but died. It's believed Angel survived because he fell on the grass while Garo fell on concrete.

The dogs' real owner is described as an older man who is now heartbroken over what happened to them after they escaped from his home near 55th and Troy. They were picked up by a Good Samaritan, and their pictures were posted to the local Facebook page. Investigators say Hannania falsely claimed them as his only to have real owner show up a short time later with documentation.

"I had an elderly gentleman crying so hard and praying over the dead body and over Angel, and Angel's been crying for him now," said Linda Estrada, Chicago Ridge Animal Welfare League.

Angel had to have a pin put in his leg in two places. He's also scheduled for surgery Tuesday morning.

Hanania has a criminal record, and is expected to appear in bond court Tuesday. Police are also looking into witness accounts that he was seen at an Oak Lawn Target with a black dog whose whereabouts are unknown.