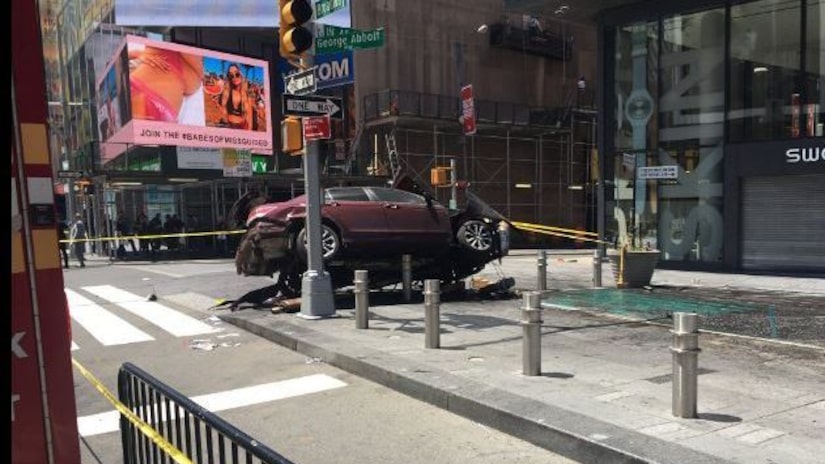 TIMES SQUARE, Manhattan -- (WPIX) -- A speeding, wrong-way driver with a history of DWIs jumped a curb at 42nd Street and Seventh Avenue in Times Square and carved a three-and-a-half-block tear of horror at lunchtime through pedestrian-choked sidewalks, killing an 18-year-old woman and injuring 22 others, four of them critically.

The driver, who allegedly put up a fight and threw punches at a traffic agent who tackled him, is in custody and being tested for alcohol, sources told PIX11 News. The sedan came to rest at Broadway and West 45th Street.

The driver has been identified as Richard Rojas, 26. He is a resident of the Bronx and served in the U.S. Navy, Mayor Bill de Blasio said.

Rojas has been arrested in the past and has two prior incidents of driving under the influence, NYPD Commissioner James O'Neill said at a midday news conference. His most recent arrest happened this month for alleged menacing. 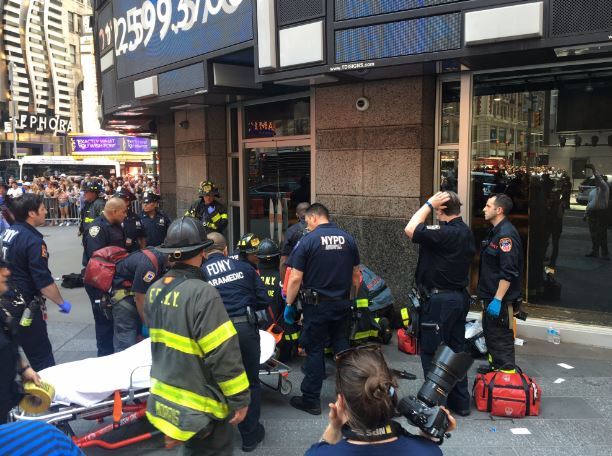 FDNY
Emergency crews respond to the scene of a deadly crash in Times Square on May 18, 2017.

There is “no indication” that the crash has links to terrorism, de Blasio said. Still, anti-terror security will be stepped up as a precaution and crowds were being pushed back in all directions while the scene is under investigation. Pedestrians and drivers are urged to avoid the area if possible.

Police said Rojas was driving south on Seventh Avenue in Times Square at 11:56 a.m. when he made a U-turn on West 42nd Street and head north along the westside sidewalks for three and a half blocks.

A maroon-colored 2009 Honda Accord came to rest with two of its wheels in the air, leaning on a lamppost and steel barriers intended to block vehicles from getting onto the sidewalk.

An 18-year-old woman was killed. Her 13-year-old sister was also hurt, officials said.

“As facts continue to emerge, my heart goes out to the victims of this terrible tragedy, as well as their families,” Gov. Andrew Cuomo tweeted.

Nigro said that while he is “very hopeful” those critically hurt victims will surive, it “doesn't mean they're cleared.”