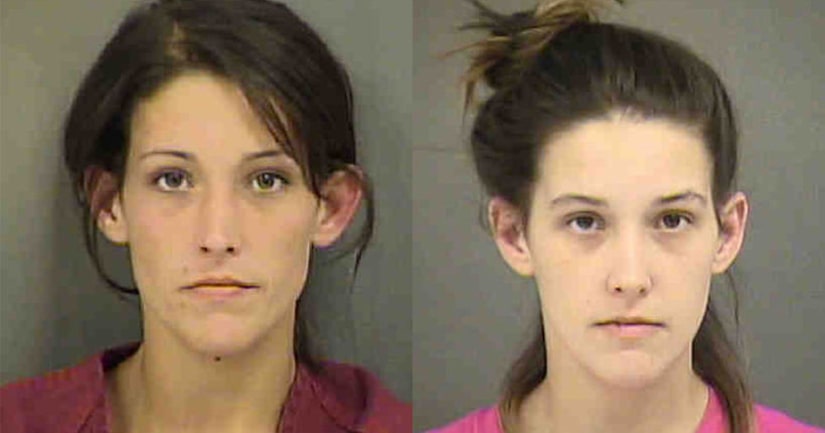 CHARLOTTE, N.C. -- (WSOC) -- More and more panhandlers are hitting the streets of Charlotte and begging for money, according to advocates for the homeless. But many people often ask, how do you really know if they need help?

Drivers in Charlotte might have come across a slim brunette with her hair tied up, asking for money, at intersections across the city.

A viewer asked Channel 9 to investigate her. Channel 9 spotted her twice at Shamrock and Sharon Amity roads. Channel 9 watched, and as the light turned green, she folded up her sign, walked back to her original spot and rubbed her belly.

Innerfield said he has cited the woman and her twin sister for panhandling.

"She was telling me they can make about $200 in an hour and a half to two hours," Innerfield said.

Channel 9 learned they are Brittany and Meghan Penninger, 27.

Both have lengthy arrest records. Brittany Penninger has a felony conviction for conspiracy to commit breaking and entering and has been arrested more than a dozen times.

Channel 9 was at the corner of 12th and Davidson streets when police arrested Brittany Penninger for panhandling earlier this month.

During the search, when the officer lifted her shirt, instead of exposing a baby bump, a ball of towels, sheets and a blanket came out.

Channel 9 anchor Brittney Johnson asked Brittany Penninger, "Do you feel guilty? People give you money because they think you're pregnant."

Penninger didn't answer. But Innerfield said she's told him why they do what they do.

"Oh, yeah, people just hand me $20 out the window. Without the belly, I don't make nearly as much money," Innerfield said the women told him.

Not only did police say the sisters stuffed bedding into their clothes to pretend they're pregnant, but Channel 9 located a court document which lists their home address as a house in east Charlotte.

A man answered when Channel 9 knocked on the door. He said the twins have lived there for more than a year, and that they've been wearing the pregnant getups for months.

"No, they're not homeless," said neighbor Laura Gaffney.

Gaffney and other neighbors told Channel 9 they've seen the sisters panhandling, and they're uncomfortable with all of it.

"I wish they would at least go about it another way and be honest, 'I don't have a job, I can't get a job, I have a kid, help,' instead of making everyone think you're a struggling, homeless pregnant mom," Gaffney said.

"My immediate reaction is how sad, how desperate they must be," said Dale Mullennix, the executive director of Charlotte's Urban Ministry.

Mullennix has spent 23 years as the executive director of Charlotte's Urban Ministry Center, where he helps the homeless find housing and jobs.

He said the majority of panhandlers are not homeless, and it's one of the reasons he tells people not to give money to people on the streets.

"You don't have time to ask enough questions to get a sense of if this person is telling me truth or not. I would suggest the short answer, please connect, please find your way to an agency that will help you,” Mullenix said.

He said as long as they're successful, they'll keep at it.

Innerfield expects to see her and her sister back on the streets soon.

"They seem like they have very little remorse about the fact that they're taking money from people on a fraud," Innerfield said.

Panhandling is a misdemeanor offense. Taking money based on false pretenses is a felony, but police said it's hard to prove unless victims step forward.

Meghan Penninger is due in court on May 19.

A relative of the twins reached out to Channel 9 to share more of the girls' story. They asked to remain anonymous but wanted to share that the sisters have a loving supportive family that is there for them and willing to help them get on the right track.

The twins arrest records indicate a history of drug-related issues and the family hopes that their story will shine a light on the harmful effects of drug addiction.

The Urban Ministry Center has case managers who help people find ways to treat substance abuse problems and find a way out of homelessness.