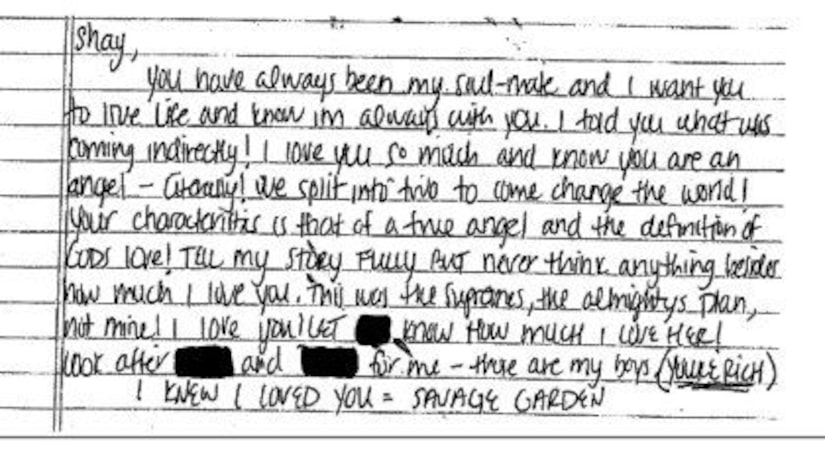 BOSTON -- (WBZ) -- A suicide note written by Aaron Hernandez to his fiancée was released Friday as a part of court documents filed by prosecutors.

The Commonwealth of Massachusetts filed the documents as part of their efforts to convince a judge to deny the request to vacate the former NFL star's conviction in the murder of Odin Lloyd.

In a letter to Shayanna Jenkins-Hernandez, the former Patriots tight end wrote that he wanted her to “live life and know I'm always with you.”

“I told you what was coming indirectly. I love you so much and know you are an angel,” Hernandez wrote. “We split into two to come change the world. Your characteristic is that of a true angel and the definition of God's love. Tell my story fully, but never think anything besides how much I love you.”

Corrections officers found Hernandez dead in his cell at the Souza-Baranowski Correctional Center on April 19.

Massachusetts State Police released their final report on Hernandez's death Thursday, including a photograph of a blood-stained bible.

Inmates who frequently interacted with Hernandez told investigators that he showed no signs of depression before his suicide and that he “carried on as normal.”

Hernandez made multiple phone calls before his death, sharing “positive feelings.” Inmates said Hernandez was “excited” after he was acquitted in his double murder case.