Strangled with pantyhose and left for dead: It's a mystery that baffled cops for decades and left a violent killer on the loose.

Karen Klaas was married to rock and roll royalty, to Bill Medley of the 1960s group the Righteous Brothers. Their haunting music would come to an end when Karen's life was snuffed out by a deranged killer.

"He probably saw Karen she was a very beautiful woman and just decided he was going to do that, and he did," said L.A. County Sheriff's Detective Larry Brandenburg.

For years police worked tirelessly to crack the case, but the killer's identity eluded them. With no tangible clues, the unsolved case was filed away, left to collect dust in the archives of the Los Angeles County Sheriff's Dept.

Then, more than 30 years later, Detectives Larry Brandenburg and Tom Harris took another look at the cold case.

"There was some investigative things that were never done that we wanted to try to find out," said Det. Harris.

The morning of the grisly murder on Jan. 30, 1976 started like any other day for Karen, who lived in a house the quaint coastal town of Hermosa Beach, California.

"She was supposed to go to coffee with her neighbors after she took her child to school," said Det. Harris.

But coffee was not on the menu. The 32-year-old mom never showed up. Her friends sensed something was not right.

"So they went to check on her. They get to the back sliding door, it was open a little bit," said Det. Harris.

They called Karen's name and heard a muffled sound. Frightened, her friends ran for help, and as they round the corner, a shocking sight.

"The front door opened and a gentleman came out with bushy kind of long hair and a beard, and he said 'Hi ladies,' and this really startled them," said Det. Brandenburg.

Frantically, the women call 911 and when cops arrive they find Karen nude laying on the floor in her bedroom.

"The neighbor ladies actually interrupted the killer," said Brandenburg. "He had completed the rape, but he hadn't completed strangling her yet."

Karen was rushed to the hospital, but she never came out of her coma. Tragically she died a few days later.

Investigators collected key evidence: Karen's bra and pantyhose and a towel lying near her body covered with the suspect's DNA.

"They did a pretty good crime scene investigation and even though DNA was not in the realm yet," said Brandenburg.

But cold-case detectives were left with no pictures of the crime scene. Forty years ago investigators didn't take photographs at the scene unless someone's body was left murdered there.

"We didn't have much to go by," said Harris.

But detectives did have a loose description of the mystery man, and with that forensic artists were able to come up with a composite sketch. Although at the time it didn't nab the killer, now investigators had DNA testing in their arsenal.

"Karen had remarried and then was divorced again," said Harris. "She had a boyfriend. We checked his DNA, we also checked her husband's DNA, her ex-husband's DNA. Everybody was cleared."

Finally, a game-changing phone call from the lead forensic biologist who worked the Karen Klaas case for years.

"She goes, 'Ever thought about doing familial?' I said 'You know, not really but maybe we should do that, that's all we have left,'" said Det. Brandenburg.

Familial DNA testing is a powerful crime-fighting tool. Laboratory technicians look for a possible male relative of the suspect, a criminal whose genetic profile is in the DNA database. They then try to match the relative's DNA with that of the suspect.

The lead forensic biologist's idea to submit the 40-year-old DNA collected at the crime scene for familial screen, a technique that's only approved for use in nine states.

"The original evidence, because I had extracted DNA, originated for a towel that had a semen stain on it that was found next to the victim," said Giselle Lavine, senior criminalist, L.A. County Sheriff's Dept.

Not just any case is approved for the specialized testing.

"You have to go through with the state, they're very protective of it. It's very stringent, restrictions on it," said Det. Brandenburg.

After months of holding their breath, the panel accepts the Klaas case. But then...

"They ran it, called me and said 'Nothing,'" said Brandenburg.

A few years pass, still no answers. But dogged investigators won't give up. One day out of the blue, a call from the familial DNA lab.

Another painful waiting period, but Lavine soon gets a cryptic phone call.

"It was, 'We've got some information for you," she said.

"Giselle called me like a month or two later and she said 'Are you sitting down?' I said 'No, why?' She said 'They got a hit,'" said Brandenburg.

Kenneth Eugene Troyer, a violent California prison escapee, a suspect in several other sexual assaults, was long dead. Troyer was shot and killed in a 1982 standoff with police.

Knowing the identity of his ex-wife's suspected killer has brought closure to Bill Medley after years of anguish.

Thanks to the unrelenting work of the Los Angeles County Sheriff's Department, they too will be able to close the book on this case. 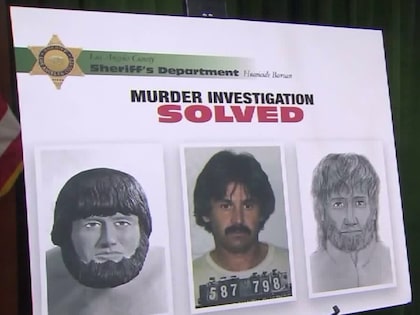