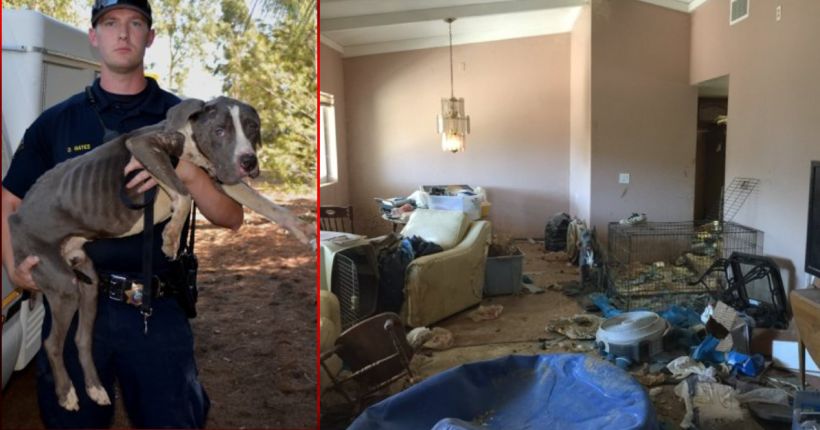 KTLA/Riverside County Animal Services
After a monthslong search, a woman accused of submitting 40 pit bulls to extreme starvation and dehydration was arrested.

RIVERSIDE COUNTY, Calif. -- (KTLA) -- After a monthslong search, a woman accused of submitting 40 pit bulls to extreme starvation and dehydration on a Riverside County property was arrested in Las Vegas on Wednesday.

Kim Settle Gallegos, 60, was subsequently charged with 38 counts of animal cruelty, the Riverside County Department of Animal Services said in a statement.

Investigators had been working to make an arrest in the case since the dogs were found July 20, 2016, on a property in the Lake Mathews area on Avocado Lane, just east of La Sierra Avenue. The home officially belonged to Gallegos’ husband, a breeder who had been jailed on unrelated charges, authorities said.

A total of 13 dogs were found dead that day and another 27 were rescued by Animal Services, according to John Welsh, public information officer for the agency. Officials originally had said 11 dogs died at the property.

The pit bulls were living in conditions of extreme neglect that spread to the ranch-style home’s interior, where makeshift dog runs had been set up with kennels and empty kiddie pools.

“This was one of the worst cases of abuse we had seen in a long time,” said Chris Mayer, commander of Animal Services. “These dogs were left in shameful conditions. Some were in such bad condition, they died of starvation or from the extreme heat. Even some of our most veteran officers were shaking their heads at the total disregard the owners showed toward these poor animals.”

Animal Services became aware of the situation after receiving a call about a “stench” in the area, the agency said.