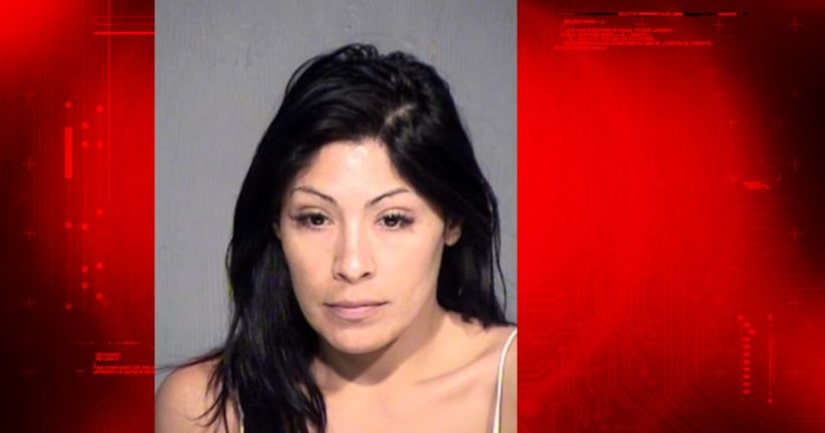 SCOTTSDALE, Ariz. -- (KNXV) -- A Scottsdale mother with a long history of domestic violence against her children threatened to kill them so they "could be in heaven together", according to police documents.

Scottsdale police report that on March 17, the young girls were with their mother, 36-year-old Jamie Redd McDonald, at her home near Hayden and Camelback roads, when she stabbed the bedroom wall and threatened to kill the girls.

Police say McDonald demanded information from the girls on what their father's new girlfriend was saying about her.

McDonald left the bedroom to go to the kitchen, where she reportedly got a knife and told the children she "wanted them to go to sleep so that she could kill them both, and so the three of them could be in heaven together without their father."

McDonald allegedly stabbed a bedroom wall with the knife and banged her head against the wall several times. After the knife had fallen behind the bed, she grabbed a metal rod and again threatened the girls, demanding information about their father.

The girls were kicked off the bed, and the older one was slapped in the head, police documents stated.

McDonald reportedly calmed down after a phone call from her boyfriend, and the girls went to sleep.

The incident was reported to police, who searched the home and found holes in the walls and the knife under the bed, as the girls described. McDonald was taken into custody following the search on April 20.

Police say this is not the first time McDonald has been arrested. The 36-year-old has four previous domestic violence conditions, three in the last few months alone.

In a March 2016 incident, Mesa police say an intoxicated McDonald went to the children's grandparents' home, where the girls were being babysat, and pounded on the windows.

Responding officers found McDonald in her car in the driveway, and when they demanded she turn off the vehicle, she began to back out. An officer attempted to stop her, but McDonald used the car door to push him out of the way. The officer managed to pull McDonald out of the car as it kept rolling, before coming to rest in the neighbor's front yard.

Based on this incident, an order of protection was served against McDonald in October 2016.

FULL STORY: PD: Scottsdale mom threatens to kill daughters, so they can 'be in heaven together' - KNXV