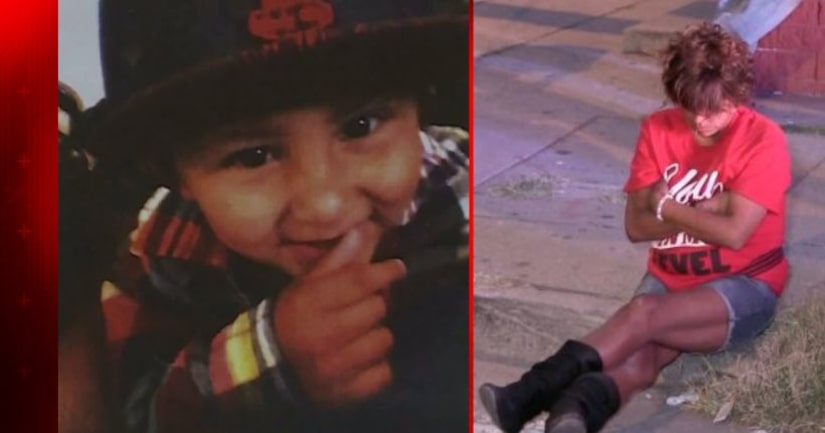 SAN BERNARDINO, Calif. -- (KTLA) -- An alleged drunken motorist accused of driving through a San Bernardino crosswalk and killing a 3-year-old boy in front of his family has been charged with murder, prosecutors said Monday.

Crystal Fuentes, 34, of Redlands was arrested at the scene of the daylight April 27 crash on West Baseline Street at Davidson Avenue. She had previous drunken driving convictions and her license was suspended, according to the San Bernardino County District Attorney's Office.

The child, Michael Flores, was walking alongside his parents and siblings in a marked push-button crosswalk with yellow lights flashing, police said.

Other vehicles had come to a stop to allow the family to cross when Fuentes allegedly moved at a high speed into the center turn lane, apparently trying to get around of the stopped vehicles. Her pickup truck hit the little boy, who a witness said had stepped slightly in front of his parents.

“I saw the impact,” said Tommy Burnside, who was driving one of the cars that stopped at the crosswalk. “The bumper hit the child in the head.”

The truck was going more than 60 mph, according to Linda Daniels, who was with Burnside. The crash was caught on surveillance video from a nearby market.

Flores' truck continued eastbound through the intersection and struck a westbound car head-on. She was arrested at the scene on suspicion of driving under the influence and vehicular manslaughter.

About 10 a.m. that day, around eight hours before the crash, she had been released from an overnight arrest by Redlands police on suspicion of public intoxication, the San Bernardino Sun reported.

The toddler was declared dead in the busy roadway.

The family was homeless at the time of the crash, but found lodging that night at a Salvation Army location.

“He was a wonderful boy,” said Saint Cristin Flores, the child's father. “He was the best son out there that a mother and father could ever ask for.”