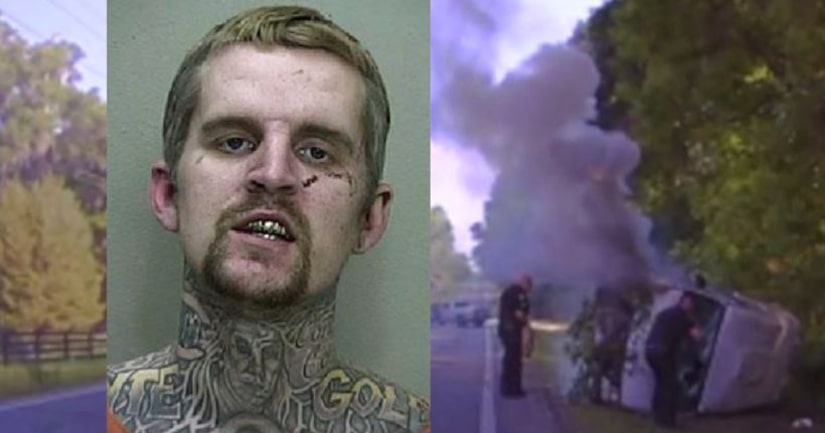 MARION COUNTY, Fla. -- (KABB) -- A man who ran from deputies in central Florida is in jail, but alive, thanks to deputies with the Marion County Sheriff's Office who rescued him from a burning van.

The incident began Sunday morning when deputies took a call about a man on his way to commit a home invasion in Summerfield, Florida. They began searching for a white van and a man known only by his nickname, "Gold Teeth."

According to the Marion County Sheriffs' Office, a deputy spotted the van at a convenience store. The deputy tried to pull over the van but the driver, identified by authorities as 28-year-old Scott Michael Beekman, kept going.

The Sheriff's Office said Beekman led deputies on a chase down several roads. On Highway 467, the van swerved and crashed through a stop sign before hitting a tree. The van caught fire.

Dash cam video showed deputies with their guns drawn as they cautiously approached the smoking van before realizing Beekman couldn't get out.

The deputies used a fire extinguisher on the flames and broke the front window of the van to pull Beekman to safety.

Deputies found a loaded shotgun, a loaded .32 caliber gun, and a loaded sawed-off .22 caliber rifle in the van.Beekman, a convicted felon, went to the hospital with non life-threatening injuries.