In a May 10, 2018 news conference, Grays County Sheriff's officials announced that missing girl Lindsey Baum's body was found by hunters in eastern Washington.

The remains had been sent to the FBI for analysis, and in the last week, according to sheriff's officials, the DNA was confirmed to be Baum's.

The remains, which were found in the autumn of 2017, were sent to Quantico, Virginia for analysis by the FBI, KCPQ reports.

Grays Harbor County Sheriff Rick Scott said her remains were found in September by hunters in a remote area. Scott did not say where the remains were found or in what condition. He said the case is now being treated as a kidnapping and homicide investigation, The Olympian reports.

Melissa Baum had moved to Washington state from Tennessee to close the door on the trauma of her divorce from Lindsey Baum's father.

McCleary, a small town of 1,500 people west of Olympia, Washington seemed to offer the peace and hope Melissa wanted for herself, and her children Lindsey and Lindsey's older brother Josh.

The kids loved it there, especially boisterous little Lindsey.

"Full of life, from the day she was born, we used to tease her that she came out of the womb talking," said Melissa. "She was just active, bright, happy, 10-year-old little girl waiting for her 11th birthday."

But mom Melissa says a shadow fell over Lindsey's apparently bright future when her daughter had a frightening premonition just a day before she would disappear.

"She said 'Mom, I just have this really bad feeling that something bad's going to happen,' and I said 'Like what?'" said Melissa. "And she said 'I don't know, I just have a feeling.' She knew something was coming, but she didn't know what. And the next night she was gone."

Just a few hours earlier, Lindsey and her brother Josh walked a short distance from their house to the home of her girlfriend Micayla. And along the way a family friend told Josh to go back after he had a fight with Lindsey over a bike.

"And he walked in the door not five minutes after that, mad that Lindsey left his bike," said Melissa.

Lindsey would head home shortly afterward, upset that Micayla was not allowed to stay over at her place that night.

"It was a Friday night about 9:30 when she left her friend's home, and she was going to walk to her home," said Grays County Sheriff Rick Scott. "Her walk would have taken her about seven, eight blocks to get to her house. She never showed up."

Lindsey was last seen on the night of June 26, 2009. Rick Scott was the undersheriff at Grays Harbor County Sheriff's Office, the day Lindsey disappeared.

"At about 11 o'clock her mom called 911 and reported her missing, so that began a search of the local immediate area by the McCleary Police Department, some volunteer firemen and her mother and some friends," said Scott. "We would maintain that search-and-rescue component for the next 10 days, and that grew to involve over 240 people, ground searchers, air search and rescue, dogs, horseback."

"Our job was to make contact at every residence along that route," said investigator Polly Thomas.

Polly Thomas was one of the original investigators working closely with Rick Scott. They both wondered how in such a small town a little girl could vanish with no one knowing how, or why.

Is it possible that this 10-year-old just fled the scene?

"No. I think within 24 hours of all that taking place, I think it was pretty clear that that was not what happened," said Thomas. "She could not have done it alone, let me put it that way. She had left her cellphone at home, she had no money on her."

"The only thing we've really been able to rule out is that she ran away," said Sheriff Rick Scott.

Her traumatized mom Melissa wonders why. She recalls something truly ominous.

"Less than two weeks before she disappeared we'd watched the movie 'Taken,' and when it was over I remember her saying 'Gosh, mom, does stuff like that really happen?' And I said 'Yes, Lindsey, why do you think I get so mad? Why do you think I insist on knowing where you are at all times? Because there are horrible people in this world that do horrible things,'" said Melissa.

"The disappearance of a child in McCleary in particular had a huge impact on that entire community," said Sheriff Scott. "It literally took the innocence of that community and erased it that night."

Over the course of the investigation, how many persons of interest were developed and looked into?

"At the height we had maybe 40 people who would have the title of 'person of interest,'" said Scott.

And as they look closer, police soon hear about something very strange.

"There was two incidents in the week prior to her disappearing," said Melissa Baum. "The girls had been up at the park in the bathroom and they said a man came in on them, but then he left and took off on a bike. The other incident was her and her friend said that they thought somebody was following them. A man in a white car."

Surveillance video from a local gas station shows a white vehicle matching the description close to the time Lindsey disappeared, but cops still can't connect any dots in the stalking story.

One, they say, was staying in a house near Maple Street, where Lindsey was last seen walking home. Investigators aren't publicly naming him.

"The initial conversation with him is that he had never left the house that night, he didn't know anything, he didn't know Lindsey and that was the end of it," said Sheriff Rick Scott.

But later, through witnesses and other evidence, cops would determine that his story was a total fabrication.

And a similar lie also surfaced when detectives focused on a second man on their list: Tim Hartman, a local business owner who made a categorical statement to police during early interviews.

"He denied being in McCleary during the evening hours when she disappeared," said Scott.

If he wasn't in town, Hartman couldn't possibly have been involved in Lindsey's disappearance.

"We would later find, again, video surveillance that showed that was not true," said Sheriff Scott.

Surveillance footage tells no lies. Hartman told police he was out of the area doing some training and was later doing an ambulance call out as a volunteer emergency medical technician. But video shows Hartman in a store in McCleary making a purchase on June 26, 2009, the day Lindsey disappeared. He leaves, heading toward Maple Street. His own shop is on the street where she was last seen.

"He was in McCleary at exactly that time that she would have disappeared," said Scott.

Despite the questions surrounding his whereabouts, investigators are not officially naming Hartman a "suspect."

Hartman has told local reporters he has no idea what happened to Lindsey.

"He claims that he had nothing to do with her disappearance, that he merely forgot that he got back that early. He thought it was later than the video would show," said Sheriff Scott. "It remains very concerning to us that he would appear to conveniently have forgotten the most important time of the day that we were certainly focused on."

Though police say Hartman was initially cooperative with the early investigation, they tell Crime Watch Daily he no longer will speak with detectives. We wondered if he would speak with us.

Crime Watch Daily visited the jewelry store that Tim Hartman owns. To be clear he is not a suspect, but his story doesn't line up, it turned out to be false. Was this just an unintentional memory lapse or is Tim Hartman hiding something? Crime Watch Daily set out to find out.

Tim Hartman declined to speak with Crime Watch Daily. However, he has told police he unintentionally gave them false information.

"In his case, there were several things that proved not to be true with what he initially told us," said Sheriff Scott. "That being said there's no evidence to point to anybody's having any involvement in her disappearance."

Today Hartman remains a person of interest in the disappearance of Lindsey Baum.

"Whoever did this needs to understand that we're not going to go away. This case will remain an active investigation, and we're going to continue to work this until we find her and bring her home," said Scott.

"I imagine any parent has felt for a moment when you lose sight of your child in a grocery store, or they get lost in the mall, or they wander off in the neighborhood -- that's been going on for almost eight years," said Lindsey's mother Melissa Baum. "That feeling doesn't go away with time."

Lindsey Baum disappeared at the age of 10. An artist provided an impression of how Lindsey might look as a teenager. 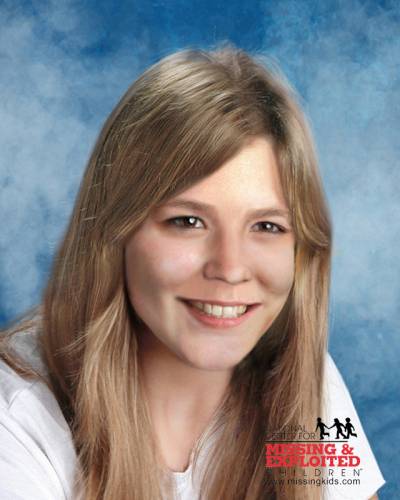 Lindsey Baum disappeared at the age of 10. An artist provided an impression of how Lindsey might look as a teenager.

"There's no one piece of evidence that points to an investigative path or scenario that says, well, we know now that she was the victim of a stranger abduction, or we know that she was the victim of an abduction by a family member or an acquaintance. We don't have anything that has allowed us to be that focused, and without that focus you can't really clear anyone with 100-percent certainty," said Sheriff Scott.

"We need the hot tip to come in, we need the person who knows what happened to Lindsey to step forward," said investigator Polly Thomas.

And help relieve a mother who still longs for an ending to a tragic story.

"I wish I could go back. The night that she walked out the door, I heard this little voice in my head saying 'Make her come back,' and I didn't do it, and that's haunted me every day for years," said Melissa Baum. "I have to believe that's it's going to be solved, and if it's not in my lifetime I promise I will haunt from the grave whoever was involved. If I have to follow them to hell to do it I will."

There is a $35,000 reward for information that leads to Lindsey Baum's whereabouts, and the arrest and conviction of the person responsible. Anyone with any information is urged to call the Grays Harbor Sheriff's Office at (360) 249-3711.