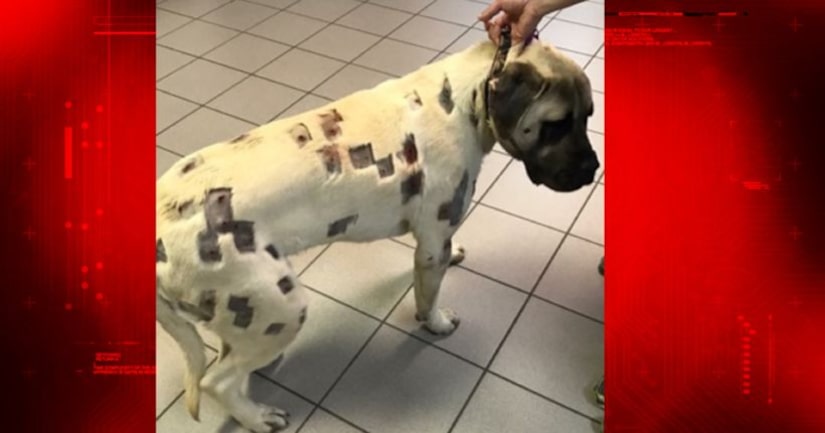 Hayden Howard says her 100-pound English Mastiff pup, named Jackson, was in her fenced-in back yard when the attack happened sometime over the weekend. She says Jackson, who is less than a year old, seemed to be acting like nothing was wrong Saturday. But then Hayden noticed something strange on Jackson's body.

“He had some marks on him and we thought they were bug bites and stuff,” Howard said. “Well then Saturday night, I saw started noticing holes on him.”

When Hayden took Jackson to the vet Monday, she was astonished to learn that Jackson's body was riddled with BBs and pellets.

“They were just kind of looking at all the little holes and stuff and the more they shaved him, they just kept finding more and more,” she said. “I was in shock, I didn't even know what to think.”

Howard says she eventually had to go out into the waiting room as the vet removed 20 BBs and 7 pellets from Jackson's skin.

“There was one under his eyelid, there was one in his ear, one in his knee, they were all over underneath of him,” she said. “They came out there and he handed me this little cup and showed me all these little BBs and I just didn't know what to say or what to do,” Howard said.

As if the shock of learning Jackson had been shot 27 times with BBs and pellets wasn't enough, Hayden says a Seymour police officer told her there were probably twice that many projectiles fired at her dog.

Seymour police investigating at Howard's home say they found evidence to suggest which direction the BBs and pellets were fired from. Investigators found several BBs lodged in a tree on the property. They followed the angle and direction of fire in the direction of the house next door to Howard's, in the 400 block of Vehslage Road.

Police obtained a search warrant for the house next door Wednesday morning, where they found evidence that could be connected to the case. Police did not wish to reveal what that physical evidence was.