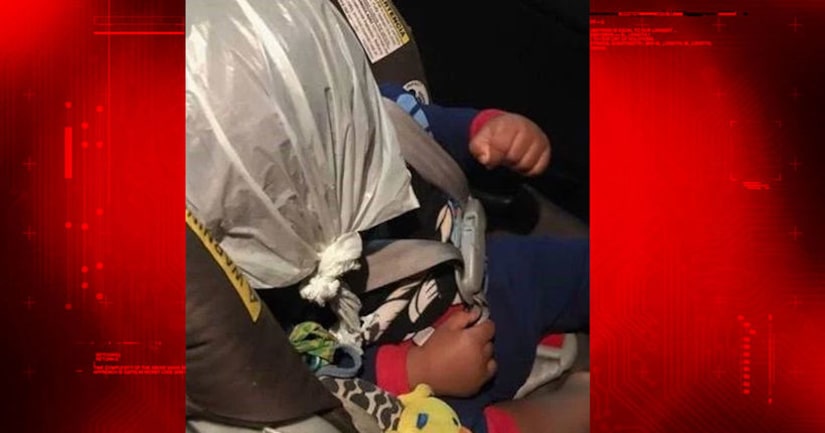 HOUSTON -- (KIAH) -- A brave aunt's heroic efforts to save her nephew from the hands of his alleged abuser has gotten national attention, and a quick response from authorities who previously ignored her cries.

Ra'Neicha Broadnax, 20, is expecting her first child, but her motherly instinct has already kicked in, which she used to save her 1-year-old nephew from harm.

After seeing videos of her nephew, Jaiden, being burned, hit and even had a bag placed over his head, she reached out from another state to contact Texas authorities begging for help.

Broadnax said, at first, she was told that nothing could be done. Her next action? Facebook!

Broadnax posted videos of the baby screaming while someone, Broadnax claims to be the baby's own mother, taunted the child.

“Tell your daddy that's what happens when you sit around and play with people,” a woman is heard telling the baby.

The videos are heartbreaking, and Broadnax said she obtained 64 of them, showing the innocent child strapped in a car seat, unable to get away from his abuser.

“That's too bad.That's too bad, yep, I felt the same way,” the woman is heard saying. The baby, so young that he only has his first two bottom teeth, stares helplessly into the camera as she continues to torture him. “Say 'Dad, you should have just left my mama out your bull****.' Say that.”

The woman continues, “You just want to keep playing so this is what you get. That's too bad, Jaiden. Too [expletive] bad!”

The woman then hit the baby again in the chest area, causing him to wail louder.

Broadnax, who lives in Virginia, said after watching three seconds of the first video, she was on the phone calling authorities.

Broadnax's older brother also lives in Virginia, but fathered a child with Janelle Peterkin, a 23-year-old woman who lives in Humble, Texas.

Broadnax said Peterkin was angry with the father, who has another girlfriend, and sent the photos and videos of her torturing their son to the couple.

There was just one problem: the brother never received those messages because he was blocking Peterkin's calls.

Broadnax's brother was arrested Thursday and when he was booked into jail, his girlfriend got possession of his cellphone.

Out of curiosity, the girlfriend unblocked Peterkin's number and that is when she allegedly made the horrifying discovery.

“My brother is incarcerated. His girlfriend was snooping through his phone and she saw he had her [Peterkin] on the 'Do Not Disturb' features, so she took it off and the phone vibrated for an hour straight. When she looked, there were over 300 messages from Peterkin and 64 videos,” Broadnax explained.

Broadnax said she knew Peterkin's address because she previously asked for it in order to send a gift to Texas for her nephew's first birthday. She placed the address in Google maps to find the nearest police station.

That led Broadnax to the Humble Police Department, which Broadnax said she called immediately. Broadnax said she asked police to do a welfare check on her nephew, fearing he was dead. She said in one of the videos, she saw the baby's eyes rolling back. Broadnax claims she explained to them what was happening, but they did not do anything.

That is when she decided to post the videos on social media. After that, she was flooded with responses from law enforcement from all over the United States.

Broadnax said investigators went to the Jaiden's daycare and called her saying that they saw no physical evidence of abuse.

But after watching the videos Broadnax forwarded them, the case was handed over to Harris County Precinct 4 deputy constables, who conducted an interview. Deputies confirm that Peterkin admitted that she made the videos about 90 days ago to show her ex-boyfriend and father of her child he did not care enough about their baby.

Peterkin was then arrested and charged with child endangerment. She was released from jail after posting a $15,000 bond.

Broadnax said her brother, who has three children, had no idea his son was being abused. The brother learned about Jaiden's abuse while watching television in jail.

“My brother was watching TV and saw me on the news and thought it was for my other brother's baby until he heard his son cry,” Broadnax said.

She said he wishes that his son's abuse had not been publicized on social media, but is grateful that his sister took action to make sure the baby was saved.

Still, Broadnax does not feel the baby is completely safe because he remains in the custody of Peterkin's family. Broadnax said Peterkin has a history of displaying erratic behavior and has previously vandalized her brother's vehicle.

“Her craziness is what got her on the blocked list,” Broadnax said. “My brother loves his kids, he has three little babies. Janelle has taken him through hell!”

Broadnax said she called Peterkin after seeing the videos, asking why she hurt Jaiden.

“She was so nonchalant with an 'OK, I don't care' attitude and she was saying it is her son, and that we did not do anything for the baby,” Broadnax said. “This is all about my brother. This is about nothing else but my brother and I want everyone to know that.”

Broadnax also wants her nephew to heal and never be harmed again.