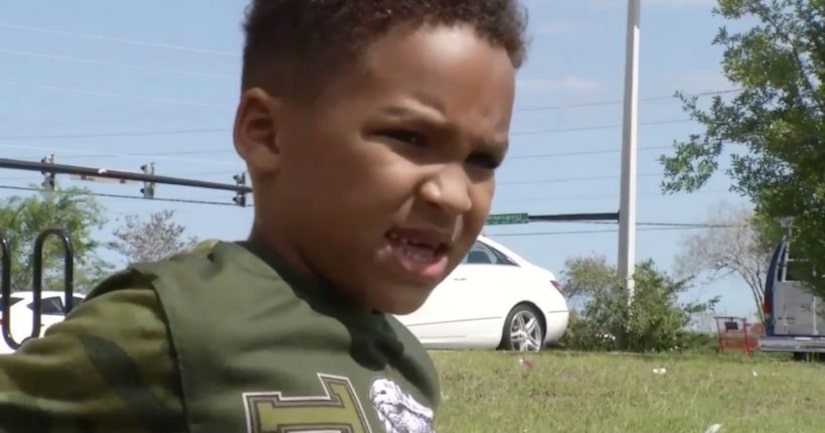 JACKSONVILLE, Fla. -- (WKMG) -- A 6-year-old boy held at gunpoint Monday night with his mother during an armed robbery at a Family Dollar in East Arlington at one point asked the two gunmen to stop robbing the store, his mother told News4Jax.

“It seemed like he was the bravest out of everybody,” 27-year-old Audriana said. “We're really proud of him. He was really brave, and that's all he keeps saying. He didn't even shed a tear. I don't know if he thought it was a movie or what."

News4Jax is not giving the last names of Audriana or her son, Zayden, because the armed robbers have not been caught.

Audriana said Zayden had just finished his homework Monday night, so she decided to take him to the store to get Easter eggs for school.

They checked out at the Family Dollar on Monument Road about 9:30 p.m. and were leaving when two thieves waving guns pushed them back to the cash register.

Audriana served in the Army, so her first instinct was to think of it as a military drill, she said.

“After I realized he said, 'Don't move buddy,' which was to my son, I realized, 'This is happening. This is real. We're involved,'” she said. “When he said the word 'buddy,' I kind of felt like (Zayden's) not going to get hurt. It's going to be one of us. That was what was going through my mind, and every time I thought about it, I had to make myself stop thinking about it and just be obedient.”

The robbers' other gun was pointed at the clerk's head. Trembling, her shaky hand opened the register, and the criminals stashed the cash in black bags.

“It is very fearful when the gun moves from you to your son so that he can tell them to hurry up because they're not going fast enough,” Audriana said.

One of the robbers was wearing socks over his hands as gloves, so he kept dropping the money he was trying to put in the bag, because it was hard to pick up.

Finally, the two took off on foot.

“When he removed the gun from my head, I just melted into my son's arms and pushed him to the back of the store,” Audriana said.

They locked the doors and when the cops arrived, Zayden, who loves superheroes, was ready to help crack the case, describing to police the weapon that had been pointed at his and his mother's heads and saying the men's masks looked like the Ninja Turtles.