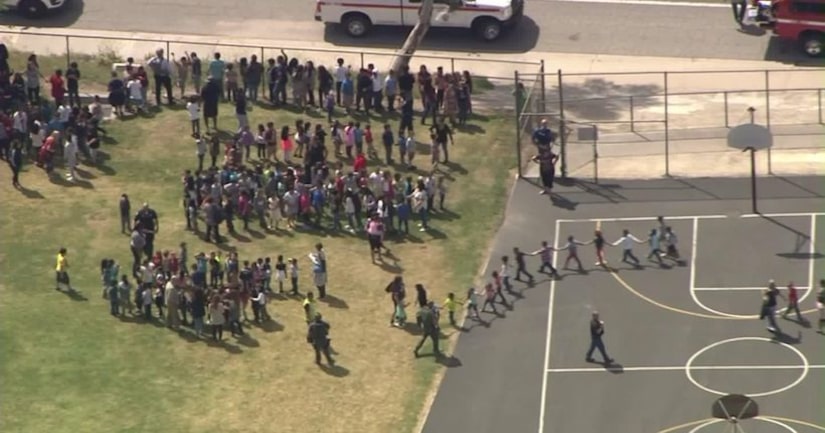 After being admitted onto the campus of North Park Elementary School in San Bernardino, a 53-year-old Riverside man went to his wife's special education classroom and opened fire Monday, fatally shooting her and striking two students before killing himself, police said.

One of the students, an 8-year-old boy named Jonathan Martinez, died after being rushed to the hospital.

Without saying anything, Anderson opened fire with a large-caliber revolver, according to San Bernardino Police Department Chief Jarrod Burguan.

Fifteen students between first and fourth grades were in the special education classroom, as were two adult aides, when the shooting occurred.

Authorities responded to the elementary school, located at 5378 N. H St., to a report of an active shooter just before 10:30 a.m., according to San Bernardino City Unified School District spokeswoman Maria Garcia.

When officers responded, they found a man and a woman dead in a classroom, as well as two injured students, Burguan said. The gunman was among those who were down, according to the chief, who said police believe there was no further threat to the school.

The two students received gunshot wounds and were airlifted to a local hospital; both were initially listed in critical condition. Burguan later said the surviving student was a 9-year-old boy who was in stable condition.

A motive for the shooting was not immediately known.

At a 12:30 p.m. PT news conference, San Bernardino Police Lt. Mike Madden said a female adult was killed and a male suspect was dead from a self-inflicted gunshot wound in a classroom.

Two students were hospitalized, listed in critical condition, according to Lt. Madden. Authorities said the suspect and victims were not related.

Police said they have the correct identity of the male suspect and were currently at his residence investigating.

SAN BERNARDINO, Calif. -- (KTLA) -- Two adults were found dead in a classroom and two students are hospitalized after a shooter walked on to the North Park Elementary School campus in San Bernardino on Monday and opened fire in what the police chief characterized as a suspected murder-suicide.

The preliminary information was that a total of four victims were being treated, according to a tweet from San Bernardino Police Department Chief Jarrod Burguan.

The gunman was among those who were possibly down, according to the chief.

Two students were transported to a local hospital after the shooting, which took place in a classroom, he said.

“We have two students who have been flown by MediVac helicopter to a local trauma center,” San Bernardino City Unified School District spokeswoman Maria Garcia said. Their conditions were not immediately known.

The third victim is a a teacher, according to Garcia.

Garcia told KTLA the situation is believed to be “contained.”

It was not immediately known how the gunman got into the school. During the day, the school office is the single point of entry, she said.

“Our school campuses are obviously closed campuses during the school day … the time of 10:28 a.m. would have been well into the school day. We do not know how that suspect gained access into our school,” Garcia said.

She added that the elementary school does not have uniformed police officers or campus security, unlike the district's middle and high schools.

“Our middle schools have campus security and all of our high schools have uniformed police officers,” Garcia said.

Authorities have not yet said whether the two adults who were found deceased were the teacher and the shooter. However, Burguan said police believe the suspect “is down” and that there is “no further threat.”

The San Bernardino County Fire Dept. first confirmed there were multiple victims at approximately 10:45 a.m., but did not provide a count.

Students at Cal State University San Bernardino, which is not far from the elementary school, were asked to shelter in place amid the active shooter report, the college tweeted. The shelter in place order was removed around 11:40 a.m.

Parents are asked to go to the high school and have a picture ID in order to pick up their students, the School District tweeted.

“If parent are looking to reunite with their children, all kids are being transported to Cajon High School,” Garcia said.

As of 11:50 a.m., no students remained on the North Park campus, according to the district spokeswoman.

In addition to North Park, Cajon Elementary School and Hillside Elementary School were also placed on lockdown, according to the School District. It was not immediately known how long the lockdowns would last.